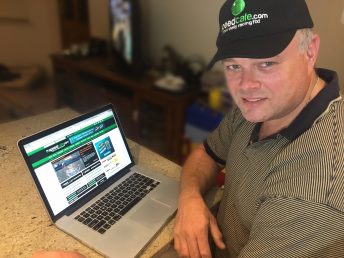 Speedcafe.com will welcome its first guest journalist for the year when local guru Stuart Martin joins the team for this weekend’s Clipsal 500 in Adelaide.

A long and respected contributor for News Limited, Martin is now a South Australian-based freelance writer who is looking forward to the hustle and bustle of some hard news reporting in front of a home crowd.

Martin joined News Limited as a staff reporter with the Daily Telegraph in Sydney in 1996 and moved into motoring in 2000.

He joined the Adelaide Advertiser in 2003 and became a motoring and motorsport writer in 2005 before becoming motoring editor in 2008.

In 2012, he became the National Features motoring writer for Carsguide and in 2014 went out on his own to become a freelance contributor – but not before covering a dozen Clipsal 500 events.

“I am looking forward to a fun weekend digging up stories at a race track,” said Martin.

“Speedcafe.com has made a hell of an impact since its establishment more than six years ago and is the daily “go to” for any motorsport fan.

“The Clipsal 500 has evolved into one of the world’s great motorsport events and I look forward to contributing some fresh eyes and a bit of local knowledge to the Speedcafe.com coverage for the fans.”

Martin joins the Speedcafe.com team headed by senior Supercars and F1 reporter Tom Howard and staff journalist Dan Herrero who will be providing on ground in depth coverage of one of the world’s biggest motorsport events, including live updates of every session of the opening Supercars championship.

“It is hard to watch a bloke of Stuart’s talents sitting around doing nothing on a race weekend like the Clipsal 500, so we offered him a job,” said Speedcafe.com founder, Brett Murray.

“Once a news hound, always a news hound. Stuart is a terrific journalist and I am sure he will stir things up a bit and contribute some valuable local knowledge this weekend.”

Supercars action gets underway with the first practice session of the year at 9.40am (Adelaide time) tomorrow.