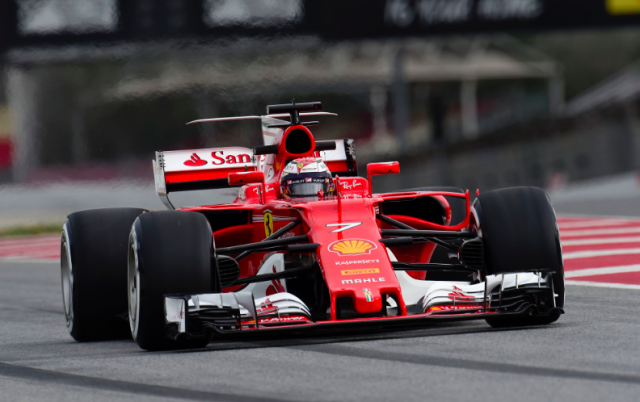 Ferrari enjoyed an encouraging day with its new SF70H completing 102 laps at Barcelona as Raikkonen topped the timesheets with a 1:20.96s.

The Finn posted the time on soft compound tyres which proved to be 0.02s faster than Mercedes’ Lewis Hamilton, who clocked his personal best on the super-softs in the morning session.

Once again Mercedes split its running between Hamilton and Valtteri Bottas, with the latter driving 102 of the 168 laps the Brackley squad recorded.

Mercedes trialled an updated version of its radical T-wing, while Bottas completed a race run, which saw him eventually end up seventh on the leaderboard.

As predicted, the pace is significantly quicker than last year as teams acclimatise to the fasters cars following the introduction of new aerodynamic regulations.

Verstappen edged Kevin Magnussen by 0.004s as Haas F1 produced another solid performance with the VF17.

Antonio Giovinazzi, filling in for the absent Pascal Wehrlein, was ninth for Sauber, who were hit by engine problems.

McLaren endured another difficult day with the Woking squad forced to make its second Honda engine change of the week.

However, McLaren’s troubles were topped by Williams who abandoned the day after its FW40 sustained damage following a spin for Lance Stroll.

Stroll damaged the front wing when he ran off the road after just six laps which was unable to be repaired by the Grove squad.

The third day of the opening F1 pre-season test will begin later today.