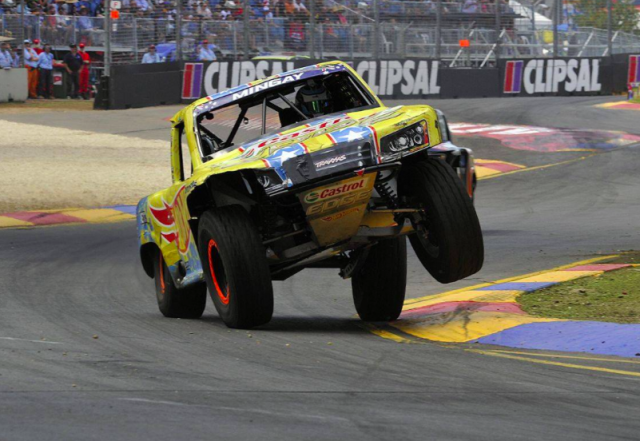 Matt Mingay will make his racing return at the Clipsal 500

The Clipsal 500 will see two of the biggest comebacks in Australian motorsport history when Matt Mingay and Toby Price compete in the Adelaide Casino Stadium Super Truck support races this weekend.

Mingay will race for the first time in his Hot Wheels/Castrol entry after a life threatening Super Truck crash at Detroit’s Belle Isle circuit in June last year, which destroyed his bottom jaw and broke his top jaw and 40 other bones.

Mingay returned to his stunt machines in October, but this weekend will be his first race appearance following an extensive rehabilitation program, which has included a series of operations.

The popular stunt man, who also sustained a brain injury in the incident, had a prosthetic jaw inserted following the freak accident, which left him unresponsive when safety workers arrived at the scene.

The Gold Coast-based athlete was aiming to return to the track at the Castrol Gold Coast 600 last year, but his comeback was put on hold, although he has been able to do some stunt shows.

“It’s so great to jump back into the Stadium Super Trucks after my huge accident,” Mingay told Speedcafe.com.

“It happened in June last year. It killed me, put me in a coma and in hospital for 13 weeks, but I can’t wait to shred it with all those crazy guys again.

“The fans are what keep me so inspired to go out there and kick some serious butt.

“At the same time I intend to really enjoy myself.” 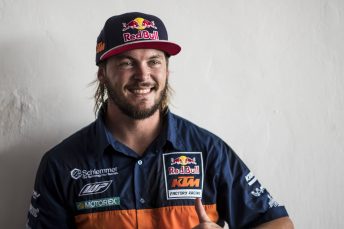 Fellow countryman Price has also endured a heavy rehabilitation program since he broke his left femur on the fourth stage of the Dakar Rally in January.

The 29-year-old from New South Wales was leading on the 416km stage from San Salvador de Jujuy to Tupiza in Bolivia when he lost control at 90km/h, 45km from the stage end.

The KTM factory rider was set to be one of the Clipsal 500’s big off-track draw cards as the lead rider in the New Holland Enduro-X presented by Monster Energy.

While Price is fit to race in the Super Trucks, the two-wheel component has been ruled out, according to Clipsal 500 General Manager, Nathan Cayzer.

“When we heard about his (Toby’s) accident at Dakar we were focused on his health and getting him home safely so he could start his recovery,” said Cayzer.

“He is such a determined athlete and has left no stone unturned with his rehab. Whilst we’re disappointed he won’t be racing around the world-first SuperEnduroX track, we’re thrilled to have him back at the event on four wheels.

“I think I’m not alone in saying we’re all really happy to see Matt (Mingay) back on track after what’s been a really tough year for him and his family after his crash in Detroit last year.

“Matt and the Hot Wheels Stunz Inc team have been an integral part of the Clipsal 500 Adelaide’s on-track entertainment and there’s no better stage for him to make his return.”

Mingay and Price will be two of six Australians in the 12-truck field including Paul Morris, Matt Brabham and South Australian locals Craig Dontas and Greg Gartner.