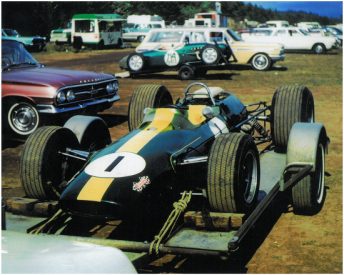 Back in 1967, promising SCCA racer Mike Fisher drove an ex-Jim Clark Lotus 33 in the Canadian and Mexican Grands Prix. Fisher went on to enjoy a long career as an Air National Guard fighter pilot while continuing to race successfully in the Pacific Northwest aboard a series of Formula B cars. But those races in the ex-Clark Lotus were the high point his racing career and Fisher looks back warmly on the handful of races he ran in the car.

The Lotus Fisher drove at Mosport and Mexico City fifty years ago was Clark’s chassis number R11 featured on the cover of last month’s Motor Sport. In 1965 Clark won that Belgian, British, German and Syracuse GPs in R11 on the way to his second world championship. At the time the car was powered by a 32-valve, 1.5 liter Coventry Climax V-8, but when Fisher raced the car two years later it was fitted with a 2.0 liter BRM V-8 following the introduction of F1’s new 3.0 liter formula in 1966.

Fisher started racing when he was in college at the wheel of a fuel-injected 1959 Corvette. He won his first race with the Corvette and after his college years Fisher bought at Lotus 18 from Pete Lovely. The 18 was powered by a Formula B spec 1,600 cc Ford/Cosworth motor and Fisher won eighteen of nineteen SCCA races he ran with the car in the Pacific Northwest and California. He then bought a Lotus 27 Formula Jr car from Pierre Phillips and ran seven or eight races in that car.

“At that time Porsche-Audi Northwest had just gotten their first Porsche 906 and a good friend of mine arranged a test drive for me,” Fisher recalls.

“We went up to Seattle International Raceway and ran the Porsche. Eyerly and I were pretty equal on lap time but for some reason they liked me better and I got the ride.”

Fisher ran half a dozen races in the 906 at Seattle and Portland. He also did the Road America 500 at Elkhart Lake with Pete Lovely co-driving.

“We won the under two liter class!” Fisher exclaims. “The Porsche factory team was there and we beat them. We put long range tanks in the car so we only had to make one stop and that’s what won it for us. I think we finished tenth overall against all the Can-Am cars.”

But at the first race of the next season at Portland’s Delta Park Fisher crashed the 906 after avoiding an errant Triumph TR4.

“At the end of the backstretch this guy pulled right out in front of me. I had to take a evasive action and crashed into a Sheriff’s car that was parked where it shouldn’t have been. It ripped the steering wheel off the Porsche and I broke my jaw and knocked a couple of teeth out. We sold what was left of the 906 to Monte Shelton and he put it all back together and ran it pretty successfully.”

Then came his short romance with the ex-Clark Lotus 33 and a brief appearance on the F1 stage.

“Pete Lovely called and said there was a Lotus 33 chassis number 11 for sale. So we bought the car. We had it airfreighted to Detroit and Pete and I drove out and picked the car up. We put it on our little trailer and hauled it up to Mosport for the Canadian GP.

“We didn’t even know how to start it but they put us next to the Lotus guys in the paddock and they were very helpful. The race officials came up and told us I had to qualify within ten seconds of pole so we went out and I was able to do that. I started from the back row beside Canadians Eppie Wietzes and Al Pease.

“When they called us to the pre-grid it started raining and it came down pretty good. At the start there was a wall of spray in front of me and I managed to pass two or three cars going down into the first corner. Luckily I didn’t hit anything and we went into the race.

“It rained off and on all the way and I think it took 2 hours and 40 minutes to run the race. I got water in one of the spark plugs and had to come in and change the plug. So it was interesting. I learned a lot and my times in the race weren’t bad. There were a couple of laps where I was actually third or fourth quickest. That car was very easy to drive. It was very forgiving.”

“After the race Colin Chapman came over and shook my hand. He said, ‘That was outstanding for your first Formula 1 race.’ That was good to hear because Chapman wasn’t a guy who gave out compliments. We also made enough prize money to pay for the car, which was kind of nice.”

Fisher next drove the car in an SCCA race in Oregon, winning comfortably. 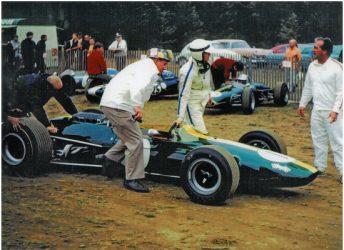 “We took it back to Portland and I ran an SCCA race at Newport, Oregon. Except for qualifying at Mosport I hadn’t driven the car in the dry and it was a pleasure. Like I say, it was very forgiving. It didn’t have any bad habits. It was a nice, neutral car.”

Fisher and Lovely then got ready for the Mexican GP.

“After Newport we pulled the engine out and shipped it back to BRM. We wanted to freshen it up and have the BRM guys put the high altitude fuel injection stuff in for Mexico City. We got the engine back and put it in the car and Pete Lovely volunteered to drive the car down to Mexico. I made a cover for the Lotus and we put the car on the trailer and Pete towed it down there behind his Oldsmobile Toronado.

“When we got to Mexico we actually got some starting money for showing up. I think I out-qualified a couple of guys but on raceday when we put the race plugs in and fired it up there was a problem. It was only running on four or five cylinders and I couldn’t get full throttle. So I trailed around behind everyone on the formation lap and then came in to see what we could do as they started the race.

“The BRM guys came down and one of them said he knew what was wrong. They had to tear into the fuel injection system and change some stuff but by the time we got it fired up the race was half over. It wasn’t worth going out so I spectated that race. It was very disappointing.”

But Fisher does enjoy the memory from that weekend of a driving lesson from Jim Clark.

“I chatted with Jimmy Clark for about an hour one day in Mexico City. He was a nice guy and a damned good racing driver. On my first day out on the track in Mexico he followed me for a lap and later on he suggested to me that I move my line down a few feet. It was neat getting a driving lesson from Jim Clark.

“After the race everyone went out to dinner at El Presidente’s. We took a taxi out there and had dinner with all the F1 guys. A lot of them had questions about what I was going to do and if I was coming to Europe the next year. One of the Lotus guys said they had a Formula 2 car that I might be able to run.”

Unfortunately however, Fisher’s budding career was sidetracked by the war in Vietnam.

“That was the time of Vietnam and I was prime draft age,” he recalls. “I thought I was going to get drafted but an Air National Guard major I knew from racing arranged for me go into the Air Force. I had to go through a barrage of tests and a physical and was sent off to pilot training.

“So I spent a year in Del Rio, Texas at Laughlin Air Force base flying T41s, T37s and T38s. It came really easy to me and I liked it, especially the formation flying stuff. Then I went back to Portland and was on full-time, active duty. 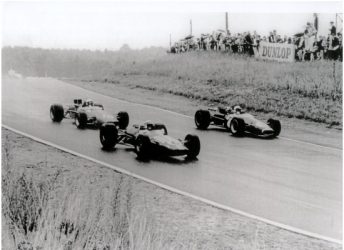 “I was full-time in the Air National Guard during that time doing flight and weapons testing. I started flying 102s, then moved on to 101s, 104s and F15s. I saw the evolution through those planes. The 101 did everything wrong. It had a lot of grunt and it would bite you in the ass if you weren’t careful.

“When they built the 104 they took out all the mistakes they had made with the 101. They put the tail down where it belonged and they pinched in the waist and put pre-ramps on the engine intake so it could exceed 1.3 or 1.4 mach. The F4 was a sweetheart. It was a nice jet. It was capable of 2.5 mach. And I really liked to F15. It had no bad habits. It was very easy to fly.

“After a while I bought a Brabham BT29 from Pierre Phillips and ran about seven or eight races in the Portland area. I won all but two of them. Then I bought a March 722 which was a nice car. A little later I bought a March 78B Formula Atlantic car and I set the track record at Delta Park and Westwood in that car. I loved Westwod. It was a cool track.”

Following his retirement from flying jets Fisher worked at the Pentagon for a three-star inspector general before finding an opportunity to work in racing with CART. But he didn’t enjoy the experience and quit after only a few months.

“I went to work for CART but I didn’t like it too much. Andrew Craig hired me as executive vice-president of racing and I tried to do some stuff. I liked Wally Dallenbach. He was a really good guy. I would jump in the pace car with him and we would go out and survey the track and decide where we should improve the safety and the barriers. Wally was a great guy to work with, but the owners made it impossible for me.

“The owners ran CART and some of them were very arrogant. They weren’t interested in what I was trying to do and it didn’t work well. I was only there for a few months and I left by mutual agreement.”

After that Fisher moved to Tijares, New Mexico.

“I live out in the country on forty acres,” he remarks. “My wife died a little while ago and I’m not sure what I’m going to do. I may move back to Portland or Seattle. I had a life that was filled with speed and I guess I miss those years. Looking back, I was very fortunate. I enjoyed plenty of good races and there’s no doubt those races with the Lotus 33 stand out as a special memory.”