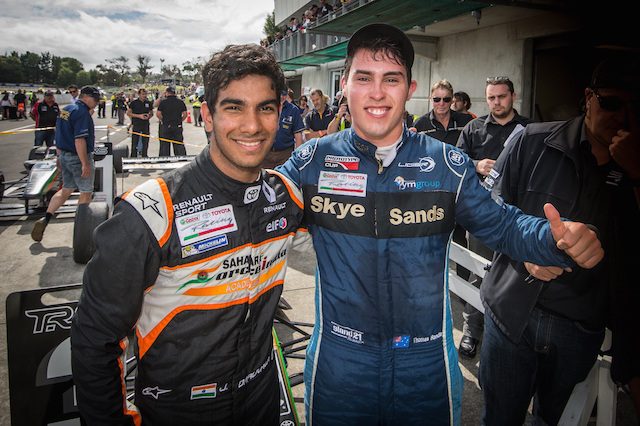 Thomas Randle has become the first Australian to win the Castrol Toyota Racing Series in a thrilling climax to the highly acclaimed New Zealand open-wheel class.

With three drivers going into the final race separated by three points, Randle withstood tremendous pressure to claim the title after finishing third in the 35-lap New Zealand Grand Prix.

The coveted NZGP was taken out by M2 Competition racer Jehan Daruvala ahead of team-mate and Ferrari junior Marcus Armstrong.

Randle, who last month announced plans to run in the British LMP3 Cup Championship with Douglas Motorsport in 2017, prevailed in a see-sawing finish to the TRS at the Manfeild Circuit Chris Amon.

After finishing third in the morning race (Randle was fourth) behind Richard Verschoor, Pedro Piquet went into the NZGP with a three-point lead in the series.

Randle’s effort to finish just off the podium earned high praised from his Victory Motor Racing team after he was pushed wide on the opening lap before recovering after plunging down toward the rear of the pack.

“I went nuts after that,” said Randle, who carved his way back through the field over the 15 laps and made a last corner, last lap pass of Ferdinand Habsburg to claim fourth and vital championship points.

“That pass saved me the title.”

In the NZGP Randle was content to remain in Armstrong’s wake, deciding discretion was the better part of valour.

Daruvala led the Grand Prix from start to finish, while Randle initially lost a place to Armstrong, with points leader Piquet running in second place.

The race was red flagged after a first lap crash that saw Brazilian Christian Hahn barrel rolling onto the front straight.

He walked away from the accident that also involved Luis Leeds.

Daruvala led while Piquet and Armstrong disputed second place, with the Kiwi getting ahead.

As Piquet attacked Armstrong, Randle took advantage and passed the point’s leader to get into a title winning position.

With Piquet finishing fourth, it meant Randle squeezed out the Brazilian for the title race by five points.