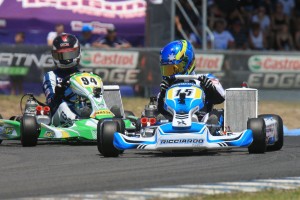 The good form of Daniel Ricciardo’s factory karting team continued in Newcastle today with Ricciardo Kart winning four of the nine categories of the opening round of the Australian Kart Championships.

Loeskow – who races for Ricciardo Kart in Europe as well as Australia – was dominant after getting a great start and although pushed all the way by ACT youngster, Joshua Fife had enough to take the win.

Hughes had been quick throughout the weekend and his heat race efforts was enough to score pole for the final – which he was able to convert.

Both Tulloch and Matthews were undefeated through the weekend, completing a perfect start to their Australian Kart Championships. 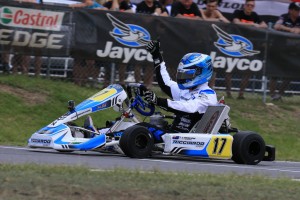 Nelson wasn’t the only driver to get his title defence underway with a win with Australian Cadet 9 Champion, Ryan Tomsett beating home Harry Arnett and Marshall Crofts to win the youngest category on show throughout the weekend – with the closest finish – Tomsett winning by mere centimetres.

Kody Garland took his maiden Australian Kart Championship win in the KA3 Senior category, beating home 39 other competitors and standing atop the podium alongside veteran, James Sera and Dean O’Brien.

The Australian Kart Championship, presented by Jayco and Castrol EDGE moves to Geelong in Victoria on the first weekend of April.

Next Story VIDEO: Bottas reports for duty at Mercedes