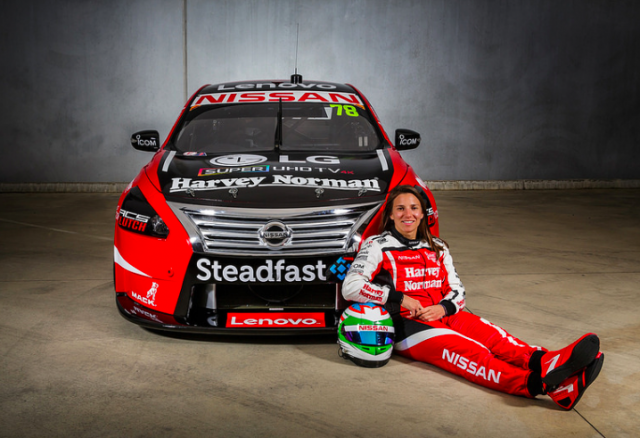 Simona de Silvestro feels she is making solid progress in preparation for a maiden season as a full-time driver in the Virgin Australia Supercars Championship.

The Swiss driver landed in Australia just under two weeks ago to embark on the next chapter of her motor racing career having signed a three-year deal to compete in the Supercars Championship, which begins at next month’s Clipsal 500.

Racing in Supercars presents a new challenge for De Silvestro who has already proved herself in single seaters on the world stage in IndyCar and more recently the FIA Formula E Championship.

De Silvestro, who is the first female full-time driver in the top tier of Australian touring car racing since Christine Gibson in 1975, has already stepped up her preparations by completing a rookie test day at Winton in the #78 Nissan Altima.

While the 28-year-old has competed in the last two Supercheap Auto Bathurst 1000s as a wildcard, she admits adjusting to racing Supercars full-time will provide a steep learning curve.

“The last test was really good.

“We understood a few things but the biggest thing for me is not to fall into any bad habits from open wheel racing.

“I really have to focus on that and understand how to drive the car.

“I think I am starting to get it but it has to become natural.

“Sometimes I get caught doing something like I would do in an open wheel car and these cars really don’t like that.

“The biggest thing is getting as many laps as possible because that is how you learn.”

In addition to learning the nuances of a Supercar, the former Sauber Formula 1 test driver will face the challenge of competing in intense heat at the opening round of the season on the unfamiliar Adelaide streets from March 2-5.

To combat the expected scorching temperatures she is undergoing a heat training regime to acclimatise to the conditions.

“Everybody has been telling me how hot it is going to be so I have really been pushing on the cardio training, so hopefully I can be as ready as I can be,” she added.

“I’m going pretty well with the heat training. I did a lot of altitude training before I came to Australia which got me pretty fit, so now I am just beginning to adapt to the heat by training outside.”

De Silvestro will continue her preparations when she joins the rest of the field at the official tyre test at Sydney Motorsport Park on February 21.