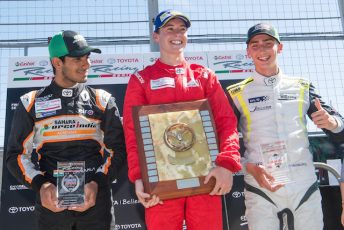 The 20-year-old Australian beat previous points leader Richard Verschoor in all three races at the Taupo circuit to assume the inside running with a single round remaining.

The Melbourne native had earlier picked up results of fourth in Race 1 and second in Race 2.

Marcus Armstrong hoisted the Denny Hulme Trophy by virtue of taking out the feature, winning the race to the first corner from the outside of the front row and leading all the way.

The victory was a bounce-back for Christchurch’s Armstrong, who had thrown away the lead during Race 1.

“At least I learned from that and proved I could win from the front.”

Indian Jehan Daruvala finished the feature race as runner-up, despite an off while closing in on Armstrong.

Armstrong earned the highest points haul of the weekend, moving himself up to fourth in the series standings.

Randle, however, leads by 27 points over Dutchman Verschoor with just the 2017 finale left to run at Manfeild, on February 11 and 12.