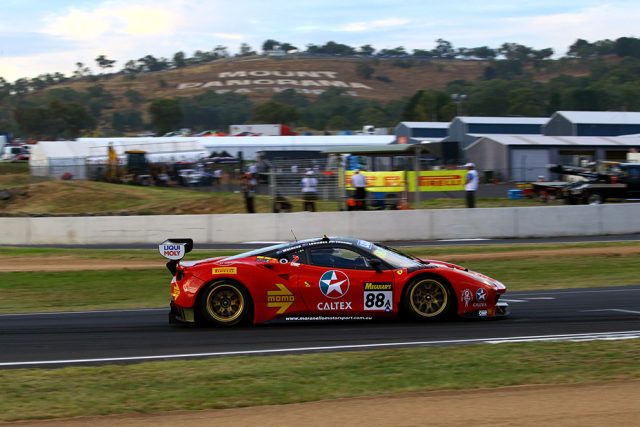 The pole-sitting Maranello Ferrari of Craig Lowndes, Jamie Whincup and Toni Vilander is leading the Liqui-Moly Bathurst 12 Hour after a frantic opening at Mount Panorama.

A flurry of pit stops was triggered when a Safety Car was called just short of the three hour mark, jumbling up the order.

During the yellow flag, Lowndes remained in the 488 to double-stint after taking over from starting driver Vilander as the #88 machine led the #22 HTP-run STM Mercedes AMG GT of Craig Baird with Todd Kelly running third in the #24 Nissan.

The top order was shuffled after a tense battle developed between the leading trio of Jann Mardenborough, Maro Engel (#22 Mercedes) and Lowndes before the former pitted and handed over to Kelly.

As the race restarted, David Calvert-Jones (Competition Autosports Porsche) tagged the #75 Jamec Pem Audi of Christopher Mies coming into Turn 1 with the spinning R8 being collected by the following MARC Mazda of Leanne Tander.

It continued a hectic opening quarter to the race where two hours into the action, Bamber pitted from lead prematurely after picking up a slow puncture.

The #911 returned to the fray only to venture back to the pits almost immediately with suspension issues that ultimately proved terminal with just under two hours in the books.

Bamber said he had an altercation with a GT4 Class machine.

“I had a touch with one of the GT4s it has snapped the steering rack and we are out for the day,” Bamber said.

Walkinshaw Racing boss Adrian Burgess told Speedcafe.com that it would have been a two-hour fix so it was decided to withdraw the car from the race.

“Unfortunately it’s a two hour change so we weren’t going to just change a joint and take any risk,” Burgess said.

Amid the Porsche developments, Max Twigg returned the #90 M6 to the pitlane as it was wheeled into the garage with steering arm damage.

In the unfolding drama, Mardenborough found himself inheriting the lead in the Nissan which was rebuilt in an all-night effort on Friday.

Earlier, Frank Stippler suffered a heavy crash near the Esses, leaving his #74 Audi stranded broadside on the traffic which triggered the first Safety Car on Lap 7.

The #23 of Alex Buncombe was then wheeled into the garage with a gearbox issue on the Nissan Nismo GT-R.

Buncombe returned to the track after losing four laps just ahead of the lights going out on the Safety Car.

Meanwhile Mardenborough, starting in his maiden event at the mountain circuit, had moved up to eighth after starting 12th.

On the restart Chaz Mostert (#90 MARC Cars BMW M6) pulled a slick move to take the lead from Vilander (Maranello Ferrari #88) in the run up to The Cutting.

Vilander dropped out of top 10 when he subsequently received a drive-through for weaving as the lights went out on the Safety Car.

Alex Imperatori found himself in the fence at McPhillamy in the Class B leading Grove Porsche which brought out the second Safety Car.

It was unfortunate timing for leader Mostert who pitted under green moments before the Imperatori incident.

Max Twigg took over from Mostert with the M6 taking on fuel as the MARC Cars team double-stinted on its starting set of Pirellis.

As the pit cycles began to shakedown, Mardenborough found himself elevated to P2 as the call to pit early reaped rewards.