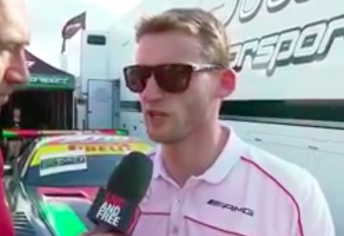 Maro Engel admits he shouldn’t have made the critical remarks about Shane van Gisbergen live on television after an explosive finish to the Liqui-Moly Bathurst 12 Hour.

The former Supercars full-timer was seething at van Gisbergen’s driving in the dying stages of the Mount Panorama endurance classic that put the Scott Taylor Motorsport Mercedes, they were sharing with Craig Baird, out of contention for the win.

Engel’s emotions erupted after van Gisbergen punted the #51 Andrew MacPherson into the wall that saw the team cop a drive-through penalty while fighting for the lead with the Jamie Whincup driven #88 Maranello Motorsport Ferrari.

Moments later van Gisbergen then hit the wall hard at the exit of The Dipper ending the squad’s race and a likely second place finish.

Engel now regrets comments made during a TV interview in the immediate aftermath of the incident.

“For sure (it was a heat of the moment thing), it was not the best time to stick a camera in my face,” Engel told Speedcafe.com.

“I think if you ask Shane he will agree that he made more mistakes than he usually would do.

“Should I have said it on live television? Probably not.

“It was very disappointing. Shane is an incredible driver and great talent and we are not used to seeing those mistakes from him, maybe that is why I got so upset.

“He has apologised to me. I’m sure he feels just as sorry for the team as everyone else.

“It is just shame to end it like that because I think we put up a great fight and we got everything out of the car and it was handling really well.”

Van Gisbergen took full responsibility for the incidents towards the end of the race and apologised to Engel and the Scott Taylor Motorsport team.

The reigning Supercars champion admitted he was driving over the limit.

“It was just a mistake,” said Van Gisbergen.

“I’m a pretty critical person on myself. I hate making mistakes and that was 100 percent myself.

“I thought I got away without a drive-through (for the MacPherson incident) and thought I could run with Jamie (Whincup, eventual winner).

“I just stuffed up and put the car in the wall.

“I was pushing on the limit and sometimes over it, we were just so slow on the straight.

“As I said it’s my mistake and I’ll be angry at myself until the next race and push on.”

Roland Dane, van Gisbergen’s boss at Triple Eight in Supercars, felt the Kiwi was the star driver in the #22 Mercedes and was gutted to see his demise.

Watching on amongst the eventual race winning Maranello Motorsport team he was assisting, Dane felt van Gisbergen made the mistake because he knew was beaten.

“I’m very disappointed and sad that he wasn’t on the podium because he deserved to be,” Dane told Speedcafe.com.

“I think he was a bit gutted that he knew Jamie (Whincup) had beaten him barring something silly happening.

“He made a closing speed error on that Porsche which is part of the race.

“We have seen it first hand that lapping people is hard and you have got to be careful.

“Unfortunately he let his concentration lapse ever so slightly and the end result was he was going to have a drive-through anyway.”