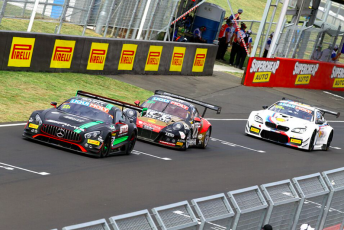 The Liqui-Moly Bathurst 12 Hour is only second to the Spa 24 Hours in terms of global GT3 events, according to category founder Stephane Ratel.

The staggering claim has come while the endurance event remains in its embryonic stage as a GT3 headline event.

The once-around-the-clock Mount Panorama endurance race evolved this year with the addition of an all-professional class for the first time.

Ratel has been a long-time admirer of the event and is attending the race for the second year running.

The London-based Frenchman believes the organiser’s decision to introduce a professional class has put the race alongside the greatest GT3 events in the world.

“I think now it is the second best behind only the Spa 24 Hours,” Ratel told Speedcafe.com.

“I always respect the decision of the promoter but I am very pleased that they have made the call to add an all professional category.

“When you see how easily it came, you wonder why it wasn’t done before.

“However, step-by-step I’m very glad it has been implemented.

“Now it is a top GT3 event comparable to the Spa 24 Hours and that is what we need.

“It (Bathurst) is one of the symptoms of the GT3 racing’s global success.

“It is actually difficult to believe that 10 years after GT3 was introduced it is still growing.”

Since moving to allow GT3 machinery in 2011, the race has enjoyed a rapid growth spurt to become a big player on the world stage.

Factory operations have increased their efforts both on and off the track with large scale activations from marques including Audi, BMW, Nissan, Mercedes, Ferrari, Porsche and McLaren adding multi-dimensions to the event.

Manufacturer entries have attracted the world’s best GT3 drivers which has produced unquestionably one of the best GT fields assembled in Australia.

Impressed by the rapid growth of the Bathurst 12 Hour since 2011, Ratel believes a fine tuning of the regulations will continue its rise on the global stage.

He feels an adoption of SRO’s full sporting regulations used at the Spa 24 Hours which features rules such as a minimum pit-stop time, would benefit the event.

Discussion to bring the rules more into line are already underway with promoters Supercars Events.

“I think progressively the rules of the Bathurst 12 Hour could come even closer to those run at the Spa 24 Hours,” he added.

“This goes step-by-step and I would encourage Supercars because we have years of experience and the rules have developed are the results of this experience.

“We have very good discussions and I’m sure the regulations will get closer. Ideally at some point it should be exactly the same rules.”