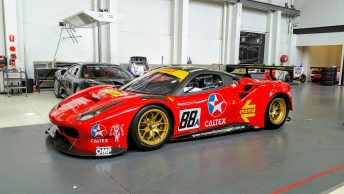 Maranello Motorsport is confident it has solved a gear selection issue that hampered its final preparation for this weekend’s Liqui-Moly Bathurst 12 Hour.

However pre-event preparations were hindered when a gear selection issue emerged during a hit-out at Phillip Island earlier this month.

The problem limited Whincup and Lowndes to a handful of laps at the Victorian circuit in what was seen as a crucial test to get the Triple Eight pair up to speed.

Team boss Mark Coffey remains confident about his squad’s chances and believes Whincup and Lowndes have slotted into the car without a hitch.

“I am a strong believer that although we have had some pretty bad Bathurst 12 Hours previously, when it comes to race preparation I like having errors,” Coffey told Speedcafe.com.

“It gets one out of the way and I’d rather have that a week out than at the Bathurst 12 Hour.

“We fitted a new AVI unit on the side of the gearbox. We had some current fluctuation which was masking itself for a while but we found it.

“Peter (Edwards) knows the car better then anyone. We were not looking for outright speed, more reliability at Phillip Island.

“It was a high 40C which will hopefully replicate what we will have this weekend.”

Maranello Motorsport will field the only Ferrari in the 54-car field at this weekend’s once-around-the-clock Mount Panorama endurance.