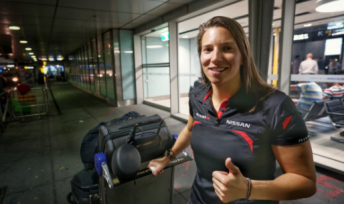 De Silvestro arrived in Melbourne last night as she embarks on the first season of a three-year deal, joining incumbents Todd and Rick Kelly and Michael Caruso in the four-car operation.

The 27-year-old is spending the day at the team’s Braeside headquarters where she will undergo a seat fitting for her foray into the 14-round Virgin Australia Supercars Championship.

While Nissan is tackling the Bathurst 12 Hour with a pair of GT-R GT3s this weekend, it is understood there are no plans to have de Silvestro on hand for any official promotional capacity.

A Nissan source told Speedcafe.com that de Silvestro will play a key role in the official season launch in Adelaide on February 9.

When her deal with Nissan for the next three seasons in Supercars was announced last September, it was revealed that the SA government had some investment in de Silvestro’s move to Australia as part of its promotion of women in sport.

It has previously been reported that de Silvestro will carry the #78, the number she used in IndyCar and one which she has enjoyed terrific success with.

de Silvestro and Gracie were classified 14th in the Bathurst 1000 last year in the Nissan-run Harvey Norman Supergirls Altima.

The pair previously finished 21st in their maiden outing in The Great Race in a Prodrive-run Falcon in 2015.