No decision on Mustang as Tickford packages surface

No decision on Mustang as Tickford packages surface Prodrive remains guarded over whether it will press the button on a Mustang Supercars program as the first phase of sister company, Tickford’s road car roll-out is detailed today.

While the Mustang is firming as favourite to replace the longest running nameplate in Australian motoring, the Falcon, on the track, Prodrive insists no decision is imminent.

The Tickford program to beef up Mustang road cars will initially involve powertrain, engine calibration, exhaust and ride and handling treatment for the GT V8 and the turbo-charged four cylinder EcoBoost variant.

While the marketing fusion between a company tailoring packages for a road-going coupe to match its Supercar remains robust, Prodrive is in no hurry to publicly name a replacement for its Ford Falcon FG X for 2018. 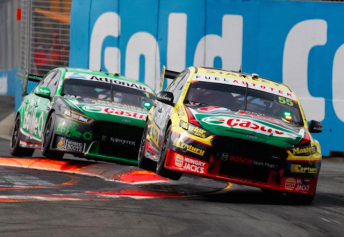 Ford Australia continues to run cold on a return to Supercars by supporting a Mustang program, however American giant Roger Penske has made no secret in recent weeks of his desire to push ahead with a pony car for DJR Team Penske.

“We haven’t decided on what or what package it will be in 2018,” Prodrive Racing Australia marketing director Peter Trevaskis said.

“We have to work with the Penske boys to formulate a plan and work through some engineering stuff.

“It’s still in the development phase.

“There is no change there in terms of linking anything with our Supercars program for next year.”

Trevaskis conceded, however, that there could be an inference that a Mustang Supercar would have direct appeal for a performance-based Tickford customer.

“If it got to the point where in three months time we have confirmed a car and we are going to do it, obviously for us, it’s a great marketing platform,” Trevaskis said.

“Because if Frosty (Mark Winterbottom) drives a rear-wheel-drive V8 Mustang on track and the company he races for builds a V8 Mustang road car that you can buy is attractive.

“So there are those links we can create between the two.”

Tickford, meanwhile, is building up its suite of options on the Mustang program which was launched in October last year.

The brand name, which is being re-born after making way for Ford Performance Vehicles earlier last decade, will offer customers a host of tuning and trim options on their vehicles.

“One thing that hasn’t translated through is that everyone has a perception that you either have to buy a car from us or you’ve got to spend $20k on beefing up a Ranger Ute which is not the case,” Trevaskis said.

“What was lost in translation is that historically if you were a Tickford customer, FPV or HSV customer you had to buy a car, and that is not the case with our program.

“We are almost the first major mainstream branded performance tuner to come out with these types of packages.”

There is evidence from Ford dealers that suggests for one in every two Mustangs sold, the buyer wants some form of modification made.

Sales of the all-new Mustang ramped to 6250 in Australia in 2016 with the soon-to-be phased out Falcon slumping to 4434.