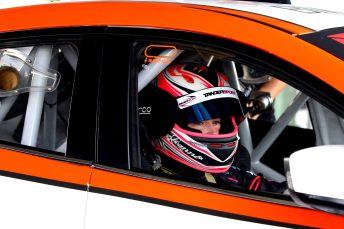 Leanne Tander is ready to tackle her first Bathurst 12 Hour since 2010 following a successful test at Queensland Raceway.

The newly crowned Australian Formula Ford Series winner jumped aboard the #94 MARC Cars Mazda V8 for the first time this week ahead of the February 3-5 Mount Panorama endurance race.

In what will be her only test prior to the event, the 36-year-old believes she quickly acclimatised from the Formula Ford to the MARC Mazda sedan.

Tander has made three previous Bathurst 12 Hour appearances having contested the 2007, 2009 and 2010 editions.

“Having raced in single seaters for a while I wasn’t too sure how well I would go.

“I have been driving the Toyota 86s so I have at least driven a sedan recently.

“The MARC Car is a lot faster and it produces very similar lap times to a Supercar, but I felt comfortable very early on and my driving style matched pretty well with the car. 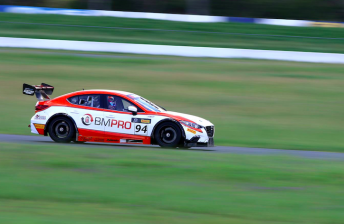 Tander gets to grips with the MARC Mazda V8 pic: Matthew Paul Photography

“I’m now really excited to be taking it up to Bathurst.

“I feel ready. I have driven the 12 Hour three times already but that was in the production car days.

“You can get all caught up in the fact that it is Bathurst and GT cars or just focus on what I need to do in the race.”

Tander is already setting her sights on a tilt for the Invitational class honours which will see her go up against a strong 10-car entry.

“I want to win the class,” she added.

“All the cars are very equal so it is going to be race within a race I guess. It will be hard as there are great drivers in all the cars.

“I can’t say we are going to win it but the ultimate goal is to win the class.”

Tander and the MARC Cars Australia squad were joined at Queensland Raceway on Tuesday by the Objective Racing McLaren 650S set to be driven by Warren Luff, Tim Slade, Alex Davison and car owner Tony Walls.