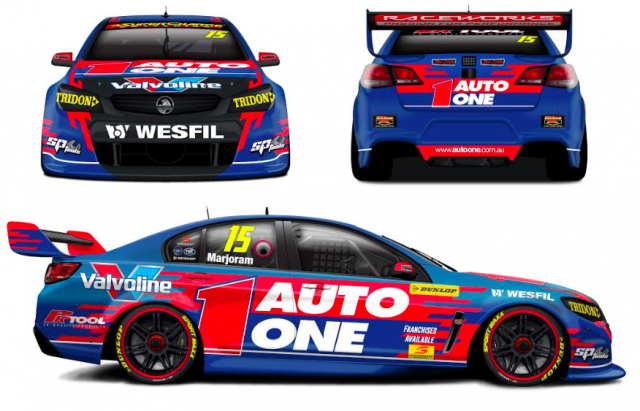 Adam Marjoram will pilot a Triple Eight built Holden Commodore in the Dunlop Series this year after confirming plans to rejoin Matt Stone Racing for a second season.

The Western Australian will replace the Ford Falcon FG he drove to 13th overall in his maiden campaign in the category last year with a Triple Eight VF Commodore.

The former V8 Utes driver will continue to be backed by automotive parts business Auto One and will feature a striking red and blue livery.

Marjoram, will once again team up with Todd Hazelwood, who will continue to drive the VF Commodore he ran throughout 2016 with Matt Stone Racing.

Equipped with proven machinery, the 23-year-old is relishing the chance to further develop his skills in the category.

With Matt Stone Racing piloting two identical cars, Marjoram expects having two sets of data to evaluate this season will push both himself and Hazelwood forward.

“It is very exciting as the Triple Eight Commodores have got a good pedigree,” Marjoram told Speedcafe.com.

“However, more importantly myself and Todd (Hazelwood) are in the same kind of car, so it is going to be a proper two car operation.

“We will be able to compare set ups and data and work together to make both cars faster.

“I have driven Todd’s car at Queensland Raceway last year and I immediately felt very comfortable.”

Marjoram is set to drive his new VF Commodore for the first time during a test at Queensland Raceway next month.

Next Story MSR expands to three for Dunlop Series tilt