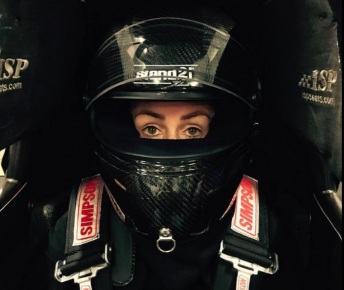 Australia’s ‘Queen of Speed’, Rachelle Splatt, will make her long awaited comeback to Top Fuel drag racing at the 400 Thunder event at Sydney dragway on January 21.

Mother-of-five Splatt flagged midway through last year that she was working on a comeback after a 10-year absence.

The brave decision to end the 47-year-old’s self-imposed exile hinged on attracting a major backer for the bid to run a full scale Top Fuel program.

Speedcafe.com can reveal that Splatt has secured long-time NHRA team man Ron Douglas as crew chief for the comeback bid.

Douglas was crew chief for Courtney Force, who has the most Funny Car wins by a female in NHRA history, before moving to the Bob Vandergriff Racing operation.

The appointment of Douglas follows confirmation that communications provider OVO Mobile will be the primary sponsor for Splatt’s return to the pinnacle of drag racing.

OVO Mobile’s naming rights and personal sponsorship of Splatt is designed on a similar strategy to its association with Supercars star Chaz Mostert.

“It takes a lot of money to run a Top Fuel dragster so a big thanks to the great team at OVO Mobile who have made it possible for my team to be racing,” Splatt said.

Splatt said that securing Douglas had been a crucial part of the puzzle in putting together a professionally-run Top Fuel machine.

“Ron (Douglas) has been around for a long time. He was around when I raced in the US in 1994 and has been around a lot of good teams and cars,” Splatt told Speedcafe.com.

“So Ron will join us for testing which will be a week before (400 Thunder event) and also raceday.

“It is an important final step because if there is one tiny thing not quite right, suddenly you lose a $70,000 motor.”

Splatt, a mother of one girl and four boys, says cracking the 300mph barrier in Australia has been a key motivating factor in her return.

“The 300mph target is not the sole goal. But to run 300 in Australia is definitely one thing I want to get out of the way,” she said.

“Because I was the first woman in the world to run 300, I can’t say that I’ve done it in Australia which has bugged me.

“I really hope I do it at the first race meeting back.”

Chief executive of OVO Mobile Matt Jones said there were plenty of synergies between his company and Splatt.

“Rachelle embodies everything OVO stands for; high performance, passionate and loyal fans and being down-to-earth and Australian.

“I felt Rachelle’s story being a national and international top fuel champion, at the same time as focusing on being an awesome mum to her kids, and then deciding to come back and follow her dream to be #1 again, aligned strongly to OVO Mobile brand and customer focus.”

“Rachelle will be a great ambassador for OVO Mobile, providing fans with money-can’t-buy experiences, sharing the OVO Mobile story with fans, and most of all getting out there and doing her best to be the best.”

Splatt said the comeback has been a monumental challenge as she has had to source everything from tools, equipment, the car, trailer and crew from scratch.

“We’ve had to start from scratch because I didn’t think I was going to comeback and compete so we didn’t have anything,” she said.

“Along with all the equipment we’ve also had to assemble the crew. We’ve had some guys who have worked on my car previously return which is great.

“But we’ve had to fill lots of positions with new guys as well.”

Splatt burst onto the drag racing scene in 1992 where she quickly reset speed and ET (elapsed time) records.

Winning the Calder Park Nationals in 1993 in her first year of Top Fuel competition, helped Splatt win a seat with the Luxor Casino Top Fuel team in the US.

It was with the Luxor team that Splatt became the first woman to run 300mph in a Top Fuel dragster.

She is the only female and only Australian on the Slick 50 300mph list which features the likes of the sports superstars Scott and Connie Kalitta, Kenny Bernstein and Don Prudhomme.