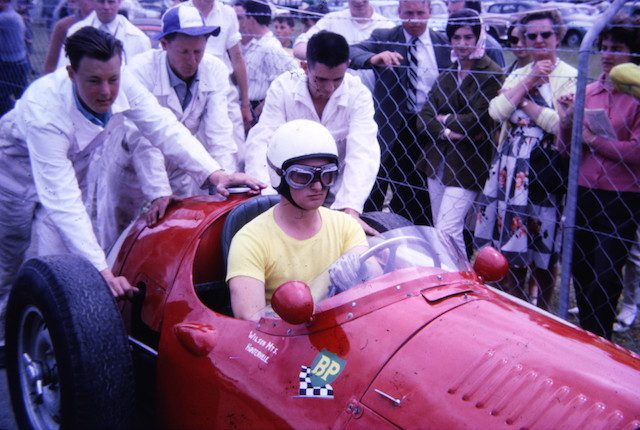 A selection of previously unpublished slides, photographs and 8mm cine film of the late Chris Amon has been unearthed.

The rare find will be shown at a dinner celebrating the Kiwi motor racing icon at the February 11-12 New Zealand Grand Prix weekend at Manfeild in the region where he was born and raised.

Among the images which will be used for a book documenting the early part of Amon’s career is one which captures the 1966 Le Mans 24 Hour winner as a 17-year-old in what is believed to be his first outing in a Maserati 250F.

It is a picture that until now has been kept in the private collection of Bruce Wilson, the man who was intrinsic in helping Amon rise to the top.

Wilson was a talented mechanic who was the driver’s friend and, for many years, his right-hand-man.

The launch of a book chronicling Wilson’s role coincides with preparation to host the New Zealand Grand Prix at Manfeild: Circuit Chris Amon.

“The circuit name change and the subsequent announcement of Jacky Ickx, the greatest racing all-rounder of all time who cut his teeth as Amon’s Ferrari team-mate in 1968, as the guest speaker at our apres-GP dinner to honour Chris has raised a huge amount of interest,” Manfeild chief executive Julie Keane said.

“Another aspect of the dinner will be a display of film and photos of all aspects of Chris Amon’s career.

“We are especially indebted to Rolf Wilson, Bruce’s son, for allowing us access to a huge trove of memorabilia that gives incredible insight to a part of the story that has rarely been documented – those very early years.”

Bruce Wilson joined Amon’s race team when the Bulls-born driver was just 16 and for more than a decade worked on most of his cars – including the Ferraris that Amon took to double NZGP victories – both internationally and from his garage in Hunterville.

The story of those days and more is in a 400-page book, the Master Mechanic, that is about to go on sale.

The image that has raised so much interest is from a selection that appear to have been taken in the small South Island town of Renwick which, in the early 1960s, hosted a popular national race meeting on its streets.

Amon recounted in a never-before-seen video interview which will be shown on the night, that this was his first race in a 200kW (270bhp) 600kg machine and was a huge step up from the Austin A40 Special, stock cars and a 1500cc Cooper single seater he’d driven previously.

“I was probably more of a passenger than anything … but I survived that, did a race at Levin with it and was still struggling to get used to it,” Amon said in the video.

“Then I got on the wide open spaces of Ardmore and, suddenly, everything clicked and it felt wonderful.”

The story of how Amon got to drive one of the archetypal racers of the 1950s is interesting.

It was on a used car yard run by Wellington motoring identity Tony Shelley, also a keen racer of the period.

The machine had been bought new from the factory by British team BRM as a test bed, and altered to suit. It remains the only 250F in which the oil tank was located beside the driver, and just one of two with disc brakes.

The Maserati, meanwhile is now a prized possession of the Southward Collection car museum north of Wellington.

Collection collator Sir Len Southward bought it in 1967, paying several hundred pounds for it in a deal sealed outside a pub.

More information about the Chris Amon Celebration dinner, including ticket price details, can be found at www.manfeild.co.nz.