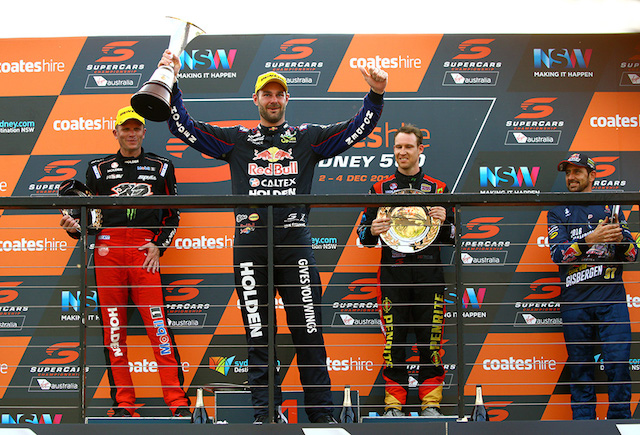 Supercars champion Shane van Gisbergen is a sensational new entry in the world’s top 50 drivers for 2016.

After a signature year which culminated recently with van Gisbergen’s maiden Supercars crown at the final Sydney Olympic Park street race, he was named 28th in Autosport magazine’s top 50 racers.

Helping van Gisbergen’s rating was his splendid win for McLaren in the Blancpain Endurance Series in a year which started with the Kiwi winning the now internationally acclaimed Liqui-Moly Bathurst 12 Hour alongside Jono Webb and Alvaro Parente.

Sweeping to the Supercars title ahead of his Triple Eight team-mate Jamie Whincup, van Gisbergen has become a key player in international sports car events.

Meanwhile Whincup snuck into the ratings, being assessed at 49, one position ahead of McLaren test driver Stoffel Vandoorne who plunged from the top 10 last year.

Double Bathurst 12 Hour champion and 2015 Australian GT title winner Christopher Mies has made it into the top 50 for the first time, being rated 44th.

Kiwi Brendon Hartley, who shared the 919 Porsche Hybrid with Webber and Germany’s Timo Bernhard, has rocketted up the order to be rated 23rd.

With the staggered release of the ratings, positions 20 through to the #1 rated driver of the year will be known over the next couple of days.