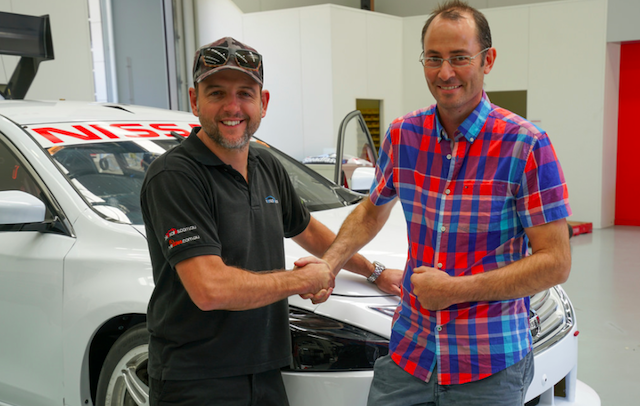 A twin Nissan Altima attack will be launched on the 2017 Dunlop Series following a technical alliance between MW Motorsport and Nissan Motorsport.

MW will engage in a handover with the Kelly-run Nissan Motorsport main game squad at Winton in a shakedown session today.

The deal will see MW purchase two existing Nissan Motorsport Altimas while upgrades and technical support is also part of the package.

Nissan Motorsport team boss and driver Todd Kelly sees the development as a boost for the main game team as it continues to strive for consistent competitive pace.

“It’s quite an advantage to either have your own team or have a relationship with another team in the Dunlop Series,” Kelly said.

“We always have our four cars in equal spec, so it will be easy to carry that over and have competitive cars in the Dunlop Series as well.

“We have been with Nissan for a while now and have accumulated a lot of stock, so to be able to put our surplus parts into good use is a big advantage.

“This gives us the opportunity to work with one of the best teams in the category.

“Matt White has had a lot of success in the past and is a really good operator. He is also really close to our workshop as well, which will be beneficial next year.”

MW Motorsport will take ownership of Kelly’s current Altima, chassis #4, which he has campaigned in over 130 races since 2013.

The partnership presents MW Motorsport with the opportunity to contest the Dunlop Series with a Car of the Future-spec machinery for the first time.

“We’ve been looking for a team partner that can see the benefits we could put forward,” MW Motorsport owner Matthew White said.

“This full technical partnership will give us access to the current specification Altimas that Nissan Motorsport are running and will offer support to ensure we are getting the most out of them.

“They have undertaken a massive program, with building cars and engines from scratch. All the resources that Nissan Motorsport have put together ensure they are a great team to partner with.

“On a personal level I am also excited to work with the Kelly’s because performance is one thing, but we’ve got to build a good relationship with the people we’re working with too.”

Next Story Changes to Newcastle street track as date set