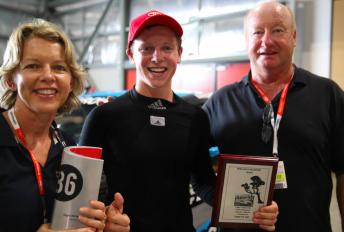 Series winner Will Brown celebrates with the Peter Williamson Trophy

Will Brown has won the inaugural Toyota 86 Racing Series title after a chaotic encounter at the Coates Hire Sydney 500.

Race 2 of the weekend was abandoned after a first corner pile-up which took out two of the round’s guest drivers, Matthew Brabham and Alex Davison.

Starting mid-pack, Davison was turned into a spin by Duncan Harrison as the field funnelled into Kevin Coombs Avenue.

Several cars careered into the accident, Brabham the most notable as his Toyota 86 launched off the rear of Graham Smith and into the wall.

With the race declared a non-result after being red flagged due to the track blockage, those behind could not collect enough points to collect to overhaul Brown in Race 3.

That encounter effectively served as the Toowoomba driver’s coronation, who won the run to the first corner and gradually pulled away from the field to take out the race and round.

The achievement is Brown’s second national title of the year after taking out the Australian Formula 4 Championship, He also finished as runner-up in the national Formula Ford series.

The 18 year old, who earns $50,000 prizemoney and a $20,000 VIP experience for his series triumph, was also issued with the Peter Williamson Trophy for the round victory.

The trophy honours the former Toyota factory driver who passed away in April, aged 78.

The Toyota 86 Racing Series commences its 2017 season at the Phillip Island Super Sprint, from April 21-23.