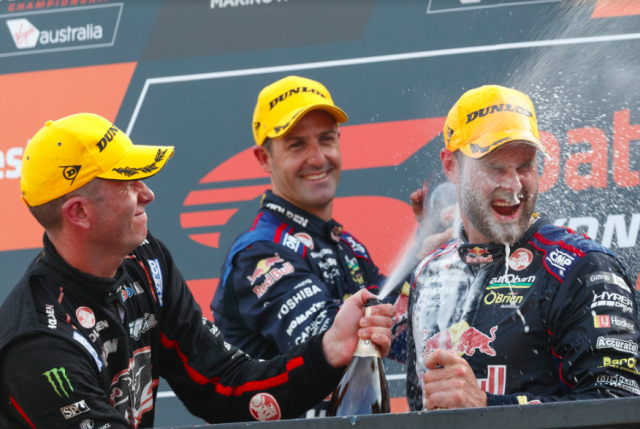 Shane van Gisbergen says he has no plans to abandon Supercars for a full-time international racing career after securing his maiden title in the Australian category.

The Kiwi is unable to defend his Blancpain crown next year due to date clashes with Supercars but will pursue selected outings with Mercedes team WeatherTech in the American IMSA Series.

Despite his obvious potential to be a major player on the world stage, Van Gisbergen says he remains hungry for further success in Supercars.

“I want to commit to V8s,” he said in a packed post-race press conference at the Coates Hire Sydney 500.

“I do a lot of racing overseas but it is all to improve V8s.

“We only get two test days a year and we don’t spend enough time in the car.

“I really think as a driver I’ve improved doing all of that extracurricular stuff.

“But every time I go overseas and experience cool things, the best level of driving, the best series is always V8s.

“Even the guys up the back… some people give them a hard time but they’re within six tenths of the front in qualifying, they’re all in a pretty high level across the field.

“Definitely V8s is the best racing and the best sport I’ve ever been a part of.

“I want to come back and try and defend it next year.”

While many Supercars drivers covet the #1 plate, Van Gisbergen added that he wants to keep the #97 that harks back to his earliest days in the sport.

“I’m probably going to have an arm wrestle with Roland (Dane, Red Bull team principal) over that one,” he smiled.

“I like #97 and you don’t need to put a target on your back, everyone knows that we got it (the championship).”

The tangle with Winterbottom came after a slow start and a poor opening two corners that shuffled Van Gisbergen from pole to sixth.

Van Gisbergen made it into the fifth place he needed 10 laps from home before climbing to an eventual third in a tense late battle with Scott McLaughlin and James Courtney.

“I didn’t really know how to approach the race,” said Van Gisbergen of the early fumbles.

“We did step one this morning in qualifying and in the race I knew people would take advantage if they had a shot and I was just too conservative.

“I got bumped around at (Turn) 1, I let everyone go and then at (Turn) 2 got a hit, so there was a bit of carnage, and then passing back through I just wasn’t assertive enough like I normally am.

“Normally I just throw it in and get it done and I just hesitated (trying to pass Winterbottom) and it cost us.

“Once I was in that position (after the penalty) I had nothing to lose and I just went crazy and hit everything except other people.

“It was pretty awesome to get back through to third and see my father and mum and my team there. Everyone was so stoked.

“It’s been a pretty awesome few years in the series and now to finally be champion of your sport, it’s a lifetime goal.

“It really hasn’t sunk in yet but I’ll have a nice dinner with the family tonight and then we’ll celebrate tomorrow night.”