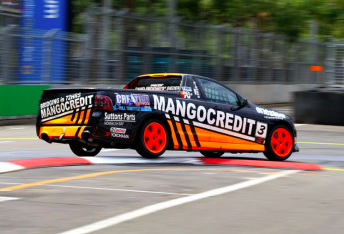 David Sieders has claimed the V8 Utes Racing Series title in style by winning the opening race at the Coates Hire Sydney 500.

The Mangocredit-backed driver withstood early pressure from the outgoing series champion before driving away from the pack in the second half of the nine-lap race.

“I didn’t realise it was over yet because I didn’t know where Nathan (Pretty) had finished,” Sieders explained.

“I’ve shaken a couple of hands but I haven’t really had a chance to let it sink in.”

Nathan Pretty was fifth, falling one position short of keeping the series alive into the final day.

Ryan Hansford had a messy race, running off while attempting to pass Jeremy Gray on Lap 5. He then clouted the tyre bundle at Turn 2/3/4 in trying to pass Matt Nolan on Lap 8.

Steven Johnson has taken out the TCM opener at the Coates Hire Sydney 500.

Johnson took the lead when he swept around the outside of pole-sitter John Bowe at the first corner, which he held comfortably until a mid-race Safety Car.

The Ford Falcon XY pulled away again when racing resumed with two laps remaining for his third race win of the year.

Bowe, who took the 100th pole of his motor racing career in qualifying, extended his points lead.

Adam Bressington caused the yellow flag period when he ran into the wall at Turn 11 while running fourth, causing Jason Gomersall to run up the escape road to avoid contact.

Mark King’s race finished in the wall after he hit the rear of Cameron Tilley’s Valiant Pacer as the pair fought for fifth through Turn 8 and up Dawn Fraser Avenue.

Will Brown has one hand on the inaugural Toyota 86 Racing Series trophy after winning Race 1.

Cameron Hill made the slightly better start from the outside of the front row but it was series leader Brown who prevailed at the first corner.

The front-runners ran in close quarters until the Safety Car appeared due to a multi-car incident on Lap 4.

John Iafolla found the wall at Turn 8 after contact with Josh Hunter and was hit by Dylan Gulson, who was in turn hit by invited driver Jonathon Webb.

There were no further moves at the front once the race resumed with a lap remaining as Brown led home Hill and Trent Grubel.

Alex Davison was the top guest driver in 15th ahead of Matthew Brabham 19th, while Webb suffered a retirement.

The title will be decided over two more races, tomorrow at 0945 and 1230 local time.