Mark Skaife and Jim Richards have been named as the first two identities to be listed in the 2017 Australian Motor Sport Hall of Fame.

The pair will be among 21 inductees into the Hall of Fame presented by Speedcafe.com at a black tie dinner co-inciding with the Australian Grand Prix at the Melbourne Convention and Exhibition Centre on March 24.

Names of the other recipients, drawn from all forms of motorsport, will be announced at the function.

The former team-mates at the powerful Fred Gibson-run Nissan squad from the later days of Group A, were announced during the Coates Hire Sydney 500 Supercars Championship finale at the Olympic Park venue, which will be used by the category for the last time this weekend.

However it was the 1992 win which was controversially red-flagged because of appallingly wet conditions which is remembered for the colourful response by Richards to a rowdy crowd which remains for of Bathurst folklore. For a period last decade Skaife, who was awarded an Order of Australia medal for services to motor racing, stepped in to assume ownership of the Holden Racing Team for five years following the collapse of Tom Walkinshaw’s empire in 2003.

While Skaife will come out of retirement to team up with Russell Ingall and Tony Longhurst at the wheel of a BMW M6 GT3 in the Bathurst 12 Hour in February, he remains cemented as a key commentator for Supercars television coverage as well as having a stake in the Car of the Future program and being influential in circuit development. 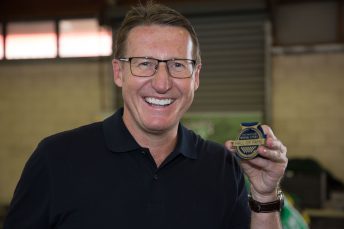 He is also a key player in the new-for-2017 Jayco CAMS Formula 4 Rising Star program.

“The Australian Motor Sport Hall of Fame is a great initiative from the motorsport governing bodies in Australia,” Skaife said.

“I’m very proud to be acknowledged as one of those drivers and riders that will be inducted next year into the Hall of Fame in Melbourne.

“When I reflect back on my time in the sport, I’ve been fortunate enough to be around some of the greats, but I don’t think there are too many as good as Jim Richards.

“Richo, with Fred Gibson and the Nissan Motor Company were instrumental in my career development in the early stages and we had a great deal of success together.”

Richards, who moved across the ditch to Australia soon after his maiden Bathurst start in 1974 alongside Rod Coppins when the pair finished third, remains humble about the gravity of the legacy he has left in the sport.

“When I set out racing back in New Zealand, I never thought about accolades. I’ve been fortunate throughout my career to have raced alongside and against some of the best over my time,” Richards said.

“Every win regardless of whether it was a Bathurst with Brock or a Targa Tasmania with Barry Oliver – my rally co-driver for nearly 25 years – it’s always enjoyable and winning is something that naturally you set out to do.” Hall of Fame chairman Garry Connelly said the second installment of inductees builds on the foundation laid earlier this year with the inaugural event.

“The inaugural Australian Motorsport Hall of Fame event was a tremendous success and we are looking forward to building on that foundation in 2017,” Connelly said.

“Both Jim Richards and Mark Skaife have made such an enormous contribution to our sport in and out of the car and some of their biggest achievements actually came while working together.

“We have another incredible list of recipients to be inducted in March and have some special surprises for the dinner which we are confident will be a sell out after the amazing success of last year’s inaugural event.”

Among the inaugural list of 30 inductees were some of Australia’s greatest racing products, the late Sir Jack Brabham, Alan Jones and motorcycling legend Mick Doohan.

A limited number of General Admission tickets for the Australian Motor Sport Hall of Fame Induction Gala, presented by Speedcafe.com are now on sale at http://www.cams.com.au/tickets.

The awards are an initiative of the Confederation of Australian Motor Sport.

It will be held on Friday night, March 24 (Formula 1 Australian Grand Prix weekend) at the Melbourne Convention and Exhibition Centre at 7:30pm for an 8pm start and tickets are $295 (Inc gst).