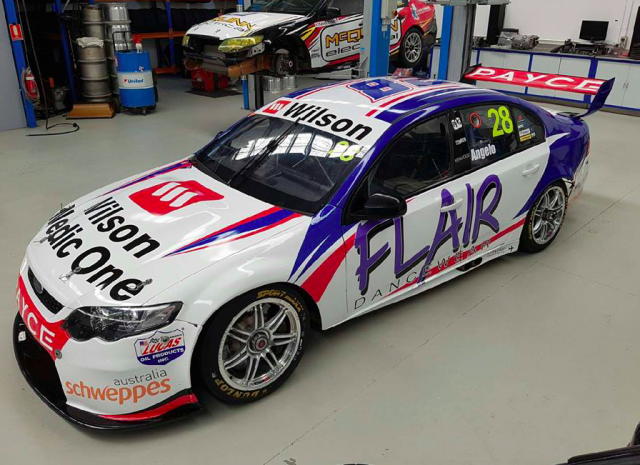 Chelsea Angelo will make a return to the Dunlop Series for this weekend’s final round at the Coates Hire Sydney 500.

The 20-year-old will once again team up with MW Motorsport where she will pilot an ex-Prodrive Ford Falcon FG.

Angelo originally joined the squad at Sandown with the arrangement continuing for the showpiece Supercheap Auto Bathurst 1000 mini endure round in October.

The Victorian has now confirmed she will see out the year after securing backing for the Sydney Olympic Park finale.

Angelo’s Falcon has undergone a livery change for this weekend, sporting a white, red and blue colour scheme featuring branding from Flair Dancewear.

The former Formula 3 racer is hoping to continue with the team next season.

“Motorsport is hard to crack into and there are a lot more lows than there are highs, but it will be good to finish the year off at Sydney,” Angelo told Speedcafe.com.

“Sandown was a good starting point to get back in the car with a new team and I can see myself  progressing with them in the future, so hopefully that can happen.

“Sydney is a tough track and it will be good to show everyone I’m still here.

“It is a good to see if I have the capabilities to race around a track like this in hot conditions.”

The final round of the season will see former series winner Paul Dumbrell sidelined from the event after sustaining a dislocated shoulder when a fall tweaked an existing injury in the lead up to the meeting.

Dumbrell underwent surgery last week but is expected to have his arm in a sling for the next two months. He is set to be fully-fit for any racing commitments for next year.

“I had a shoulder reconstruction a number of years ago, but I just tweaked it so I had to have surgery,” Dumbrell told Speedcafe.com

“If the final round wasn’t at aggressive track like Homebush then we might have had a different view of it.”

The Eggleston Motorsport driver is lying third in the standings behind Prodrive duo Garry Jacobson and Jack Le Brocq.

Jacobson is in the box seat to take out his first Dunlop Series crown with the 24-year-old holding a 166 point lead over his team-mate.

Two 17 lap races will conclude the 2016 series at the 3.4km Sydney Olympic Park street circuit with the first scheduled for Saturday at 1430 AEDST.