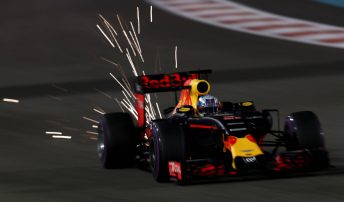 The Red Bull driver is poised to become an important factor in the destiny of the world championship after qualifying third for today’s championship showdown.

The Australian and his team-mate Max Verstappen have opted to start the race on the super-soft tyre which could see them threaten the title contending Mercedes duo late in the race.

Nico Rosberg is in the box seat to claim a maiden world championship with a 12 point lead over pole-sitter Lewis Hamilton.

Such is the German’s advantage, a third place finish would be enough for Rosberg to secure the coveted prize no matter where Hamilton finishes.

However, keen to finish his season on a positive note, Ricciardo believes Red Bull’s strategy may provide extra excitement in the championship fight.

“It seems to be a bit of a trend this year, if we’re in a position to qualify on another tyre (in Q2) we try and see if it gives us an opportunity,” said Ricciardo.

“Hopefully it puts us in the fight. There is a title on the line for these guys here, hopefully it’s fun throughout the pack and we can do something to make it even more exciting than it already is.

“As predicted Mercedes pulled a bit more than us in qualifying but we’ll see if the race comes back for us.

“That is why we wanted to try something different with the super-softs – it might give us a bit more range at the start (before first pitstops) and put us more in the race towards the end.

“We were strong on long runs, it looks good, so it’s going to be fun.”

The Abu Dhabi Grand Prix is scheduled to begin at midnight AEDT.