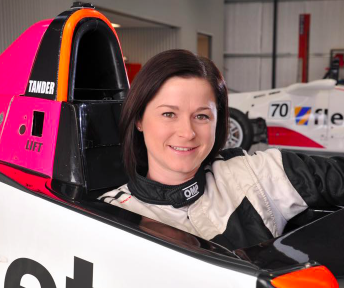 The series went down to the final race of the season before Tander clinched the title 18 years after making her debut in the popular single seater category.

The 36-year-old mother of two headed into the Phillip Island Magic meeting with a 32 point lead but faced a stern challenge from title rival Will Brown, who won all three races.

With a comfortable 18 point buffer to Brown ahead of Sunday’s final race, Tander, who finished fifth and second in the previous races, produced a measured drive to third.

As a result, she is the first female to win the Australian Formula Ford title since its inception in 1970, taking the honour by 12 points from Brown.

The triumph follows a week after Molly Taylor became the first woman to win the Australian Rally Championship.

“It is really exciting to win the 2016 Australian Formula Ford Series,” said Tander, who was driving for the Sonic Motor Racing Services squad.

“There were a few times this year where I thought I wasn’t able to pull it off, so to finish with it (the title) and take it easy in those final races was a great position to be in.

“I’m usually quite an aggressive racer and I like to get in amongst it and race hard.

“It was counter-intuitive to sit behind them but I also had to race because I could easily have been swamped by the guys behind.”

“It was a more of a mental race for me to make sure I wasn’t in the wrong spot or got taken out.

“This track lends itself to good racing with the slipstreaming, you just can’t get away.

“It was mentally challenging but very rewarding.”

Tander says the success ranks alongside her greatest achievements in a motor racing career, which includes a fifth overall in the 2001 Konica Supercars Series and Bathurst 1000 appearances in 2001 and 2009.

“I have never won an Australian championship. I have finished second multiple times and third, so leading up to this week I thought something was going to go wrong,” she added.

“I thought it can’t be that easy.

“It (the title) is certainly up there with anything else I have achieved. I haven’t really thought about where it ranks just yet.”

Without any plans confirmed for next season, she admits today’s race may have been her last.

“I don’t have anything planned for next year so that could very well have been my last race which makes it very emotional too,” Tander said.

“If things pop up I will grab them but I don’t have any plans to compete in any championship or series.”