Chaz Mostert is the latest Supercars star to sign-up for his GT racing debut in February’s Liqui-Moly Bathurst 12 Hour.

MARC GT is one of a number of squads preparing for the 12 Hour at Challenge Bathurst over the next two days, providing Mostert with his first experience of GT3 machinery.

“I’m super pumped to be teaming up with Paul and Morgan in an awesome bit of equipment,” Mostert told Speedcafe.com.

“I’m looking forward to opening up my experience in a very different car to what I usually drive.

“We’re very fortunate to be able to test the car over the next couple of days and feel what it’s like on the actual track we’re going to race at.

“My Supercars co-driver Steve Owen has done a lot of GT racing so I’ve been soaking up as much information from him as I can.

“The transition from Supercars to GTs is probably a bit easier than the other way around due to the aero and the way the tyres work, they’re quite a slick package.”

Mostert is aiming to become the first man to win Bathurst’s modern triple crown having also taken victory in the 6 Hour production car race aboard a BMW 335i last Easter. MARC’s BMW will carry its Super GT livery at Bathurst

MARC owner Ryan McLeod, whose team has recently returned from fielding the BMW in the Thailand round of Super GT, is excited about launching an outright Bathurst assault.

McLeod’s squad this year added the BMW to its fleet of MARC V8 endurance cars which will again race for class honours in the 12 Hour.

“We have a car capable of winning and what we’ve tried to do is pull together a driving combination that we think we can win with,” McLeod told Speedcafe.com.

“It’s a bit of youth and experience in Morgan and Paul, and Chaz is probably one of the top four racing drivers in the country at the moment that can do the job at the end.

“The next couple of days will be good preparation for us and we have the factory BMW guys here to lean on for a bit of support.

“We’ve had good experience with the car now in Australia and recently in Thailand, so we feel like tackling Bathurst is a step that we’re ready for.”

Brit Tom Onslow-Cole will meanwhile have his first taste of Bathurst today in a MARC V8 with a view to potentially joining Mostert, Morris and Haber as a fourth driver in the BMW. 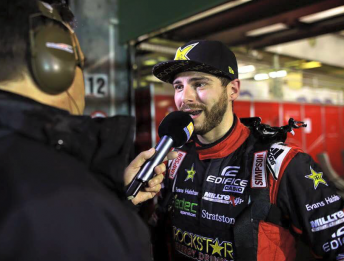 “We can only run three drivers in Challenge Bathurst, but we’re looking at running him in the BMW on Monday (when BMW is conducting a private test),” said McLeod.

“There’s a few things that need to align before we can confirm him in the car (for the 12 Hour), but he’ll get his eye in with the MARC V8 and hopefully go from there.”

Mostert meanwhile hopes that a strong showing next February can establish himself as a 12 Hour regular after missing out on a seat this year.

Despite still recovering from injuries sustained at the previous year’s Bathurst 1000 event, Mostert made an ultimately unsuccessful bid to secure a seat.

“I was definitely pushing my body to get ready as soon as I could and I was keen to do it,” he confirmed.

“But the biggest thing I found was that the Supercar drivers who have already done the 12 Hour are the first picks to get in there.

“It’s almost like being a rookie again even though you’re in the main Supercars series running at the front.”