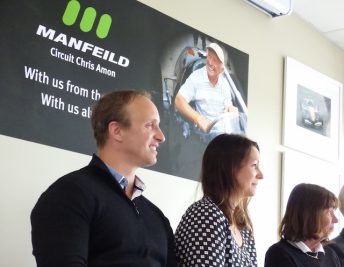 James, Georgie and Tish Amon at Manfeild as the circuit is renamed after their late dad and husband Chris Amon.

The time-honoured Manfeild circuit in the Manawatu region of New Zealand’s North Island has been renamed after Chris Amon.

Regarded as the greatest grand prix driver never to win a Formula 1 race, Amon died in August after a battle with cancer.

Amon, MBE, was held in high esteem within the broader international motor racing community with his highlight being victory in the Le Mans 24 Hour alongside fellow Kiwi Bruce McLaren in 1966.

“We are extremely honoured Manfeild is recognising Chris in this way,” widow Tish Amon said.

“He would be humbled the circuit is to carry his name.”

Manfeild was a huge part of Amon’s life. He was a regular at the circuit’s signature New Zealand Grand Prix meetings.

“He gained enjoyment both behind the wheel and as a spectator,” reflected Tish. 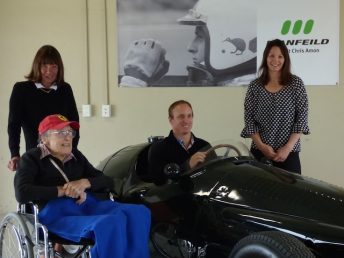 “Chris was passionate about the ongoing development of Manfeild and it becoming the home of the New Zealand Grand Prix.”

Gordon Smith, chairman of Manfeild Park Trust, and venue chief executive Julie Keane said the renaming of the 3.03km main circuit as ‘Manfeild: Circuit Chris Amon’ will be further celebrated at the next New Zealand Grand Prix, on February 11-12.

“Chris was a key figure in the Manfeild story,” said Smith.

“That is why we say ‘with us from the start. With us always’.

“He was instrumental in our track’s design, he spent countless hours here developing Toyota road cars for New Zealand conditions and he was such a powerful figure in Toyota New Zealand’s motorsport programs, especially the Toyota Racing Series that currently contests NZGP at our venue.

“We were deeply honoured when Tish and the children agreed to our request to rename the circuit in his memory.”

Two of Amon’s children James and Georgie also attended the announcement along with Bruce Wilson, who together with son Rolf recently published a book documenting Wilson snr’s time as a mechanic for Amon during his early competition years.

The naming of the circuit comes a year after the Taupo circuit was renamed Bruce McLaren Motorsport Park.