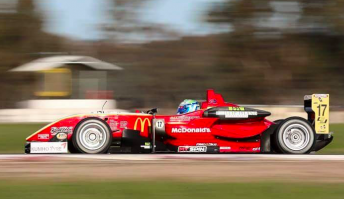 The Australian Motor Sport Appeal Court (AMSAC) has awarded Jon Collins the 2015 Australian Formula 3 title more than a year after the final round.

Collins has officially won the title after (AMSAC) dismissed an appeal submitted by Ricky Capo, who had been named as the provisional champion last year.

The Victorian driver had swept to victories in all four races at Wakefield Park having been 19 points adrift of Collins at the start of the weekend.

However, Capo was subsequently excluded from the final race of the season in October 2015 after his car’s rear wings were judged to have breached Formula 3 regulations.

AMSAC arrived at a decision on Monday after a long and drawn out affair, which sees Collins become the final Australian Formula 3 champion after the series lost its championship status at the end of 2015.

“Capo was excluded from Race 4 at the Wakefield Park meeting, Round Seven of the 2015 championship, after his car’s rear wings were deemed to be non-compliant according to the Formula 3 regulations.

“Capo had submitted an appeal against the exclusion, however the appeal was dismissed by the Australian Motor Sport Appeal Court on Monday 7 November, 2016.

“As a consequence of the ruling, Jon Collins has now been awarded with the 2015 Australian Formula 3 Championship. Collins was the championship leader at the end of Race 3.

“The decision is binding, with a full reasoning to be published from the Court in due course.”

Collins is due to join the Australian Formula 3 Premier Series grid for a one-off outing in the final round at Sydney Motorsport Park this weekend.