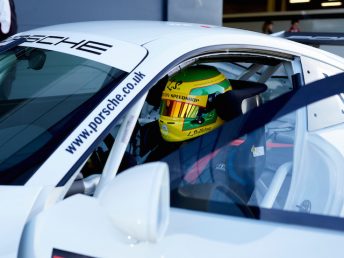 Sullivan is attempting to take the next step in his career after he took the punt and moved to the United Kingdom two years ago.

He has tasted a modicum of success in the face of skint resources, winning 10 of 12 races in the 2015 Mighty Mini Series in the UK supported by victory aboard a classic Mini in the FIA Spa 6 Hour.

A school teacher at Cambridge, Sullivan made the most of his opportunity to drive a Cup car for the first time which could see him enter the one-make championship next year.

However he admits a Carrera Cup GB start will not be possible without the help of crucial sponsorship.

“So far it has been really tough competing and winning in Europe with very little backing,” Sullivan told Speedcafe.com.

“Having the opportunity to have a test with such an iconic brand as Porsche at the prestigious Silverstone circuit was something really special.

“The Porsche 911 991 GT3 Carrera Cup Car was brilliant, after 20 laps I was well up to pace and was amazed by how well balanced the car was, with loads of power, wings and slicks.

“With loads of positive feedback from Porsche and a multiple championship winning team, my goal is to represent Australia in the 2017 Porsche Carrera Cup GB Championship.

“The ultimate goal is to progress to the sports car endurance scene.” 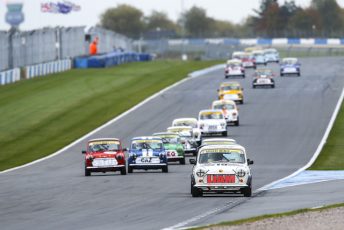 Sullivan in command of the big field at Donington

The 25-year-old admits his path has been lean since relocating to England two years ago, enduring many bumps in the road through lack of backing.

However he has refused to give up on his dream, drawing strength and inspiration from compatriot Mark Webber whose story of toil and grit to eventually become a successful grand prix driver and soon-to-be-retired Porsche factory driver is well documented.

“The journey from being a young karter back in Australia to following my dream of competing and winning in Europe has been tough,” Sullivan said.

“But at the same time, it’s been very rewarding.

“I’m on a roller coaster of a ride, meeting amazing people, knocking on doors and just waiting for that investment in my talent.”

Sullivan’s resilience to stick it out in England saw him gain employment at a kart track with its owner helping the careers of many of the world’s leading drivers over the years.

“The owner heard my story and understanding that I had little money due to the situation, he gave me a car and worked out a budget which I could afford whilst working so that I could be on the grid for the 2015 season,” Sullivan said of how he ventured into driving Minis.

“With grids of over 30 and an opportunity to compete in the UK’s most prestigious MINI Cooper championship, how could I say no?

“Fortunately we got some great support along the way to keep the season going.

“But now I need people to jump on board and help me take up the offer to compete in the Carrera Cup in 2017.”