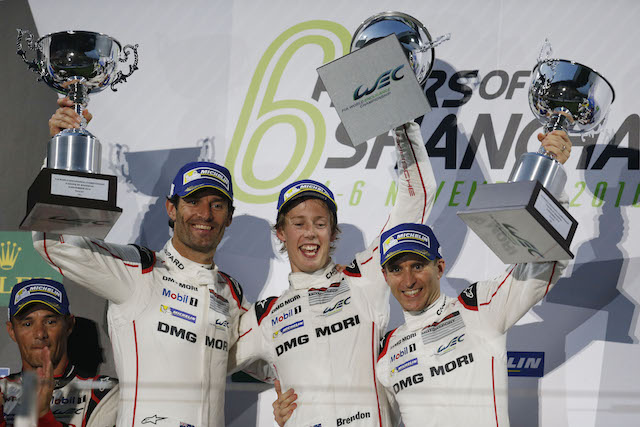 Porsche has staged a virtuoso performance to claim a dominant win in the penultimate round of the World Endurance Championship in Shanghai.

Built on a platform via Brendon Hartley’s blistering opening double stint, the #1 Porsche 919 Hybrid the Kiwi shared with Mark Webber and Timo Bernhard scored a 59.7s victory after 6 Hours.

The #6 Toyota TS050 of Kamui Kobayashi, Stephane Sarrazin and Mike Conway finished second to keep its hopes in the driver’s title race alive going into the deciding round at Bahrain in two weeks.

The championship leading #2 Porsche of Neel Jani, Romain Dumas and Marc Lieb was fourth to help seal the manufacturer’s title for the Zuffenhausen maker.

However the trio have now seen their points lead in the driver’s race reduced to 17 points with a maximum of 26 available in Bahrain.

Hartley saw Buemi tear off into the lead at the start however the New Zealand ace grabbed the position back just before the yellow flags came out for an incident on the opening lap.

The brief passage, bar the scheduled pit stops, was the only time the Porsche was not leading the race.

Toyota had fought a pitched battle throughout before ultimately being leg-roped by punctures.

Audi endured a difficult race with both their #8 and #7 R18 e-tron quattros finishing fifth and sixth.

The Audi #8 pitted from second place early in the second hour with Lucas Di Grassi handing over to Loic Duval.

It left Porsche occupying the top two spots ahead of the #6 Toyota.

Hartley, meanwhile, handed it over to Bernhard after a scintillating double stint just short of the two hour mark as the crew replaced the front wing which was damaged by a clump of rubber debris.

Jani ended his double stint by handing over to Lieb with the #2 machine trailing the sister car by just over 7s.

The #8 Audi was back in for another stop after a 22 lap stint with Duval remaining in the car.

Meanwhile the leading Porsche pitted from the lead just short of halfway with Bernhard remaining in the cockpit.

Trouble continued for the #8 Audi as it came in for its fourth service, seemingly hamstrung with an apparent refuelling issue.

With the completion of the third round of pit stops for the others, Bernhard continued to hold the balance of power with Kobayashi consolidating second place from Dumas.

Meanwhile the Toyota of Buemi was narrowing the gap on Dumas as the TS050 started to fightback.

By Lap 107, Dumas was shuffled back to fourth as Buemi took P3.

Webber took charge after 120 laps with just over two hours remaining, shortly after Dumas pitted to hand over the controls to Jani.

The fourth round of stops also saw Kobayashi pit with Conway taking over while the #8 Audi was mired in fifth ahead of the sister #7 R18.

On Lap 135, Jani reclaimed second place after Conway was forced to pit the Toyota, pushing it back to fourth behind its stablemate.

However nine laps later Buemi managed to slip into second as the Japanese and German marques continued to trade blows.

At the start, the Manor LMP2 machine at the hands of Mathias Beche spun and was collected by an unsuspecting Richie Stanaway (#97 Aston Martin).

While it was game over for the Manor, Stanaway managed to drive the Aston back to the garage however the crew realised the damage to the left front corner was too great.

In LMP2, the G-Drive Oreca Nissan driven by Alex Brundle, Roman Rusinov and Will Stevens prevailed.

In doing so Menezes ended a 35-year drought of American drivers to win an FIA title.