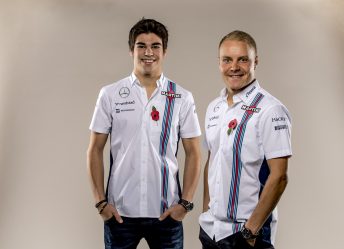 The Grove squad has promoted Stroll from his test driver role to a fully fledged race drive as a replacement for Felipe Massa, who announced his retirement from Formula 1 earlier this year.

A former Ferrari Academy driver, Stroll had long been tipped to make his F1 debut next year having dominated the European F3 Championship this season.

Stroll has eased his transition to F1 by conducting a test program in a two-year-old Williams FW36.

“To be racing in Formula One in 2017 is incredible, I can’t thank Williams enough for showing faith in my ability,” said Stroll.

“Racing in F1 was something I dreamt about as a young kid. When I began karting seriously, F1 was then the ultimate goal and especially when I started racing cars in 2014.

“2017 is going to be a big learning curve for me, but I’m eager to absorb everything Williams can share with me so that I improve.

“I’ll be taking things on a race-by-race, lap-by-lap basis and hopefully progress with experience like I did when I entered Formula 4 and then Formula 3.

“I believe contesting the FIA European Formula 3 Championship for the past two years has prepared me well for the step up.

“There are many elements for me to learn and I’m still young. I’ve been experiencing a 2014-spec Williams FW36 since August, which has gone very well.”

Meanwhile, Bottas has agreed terms on a new deal which will see him contest his fifth season at the outfit next year.

The 27-year-old Finn has scored nine podium finishes from 75 starts, with his career best championship finish of fourth arriving in 2014.

“Firstly, I am very happy that I will be starting my fifth season racing for Williams in 2017,” said Bottas.

“It’s going to be an exciting year with all the regulation changes and a great opportunity for the team to get closer to the front.”

Previous Story Sebastian Vettel spared of punishment by the FIA