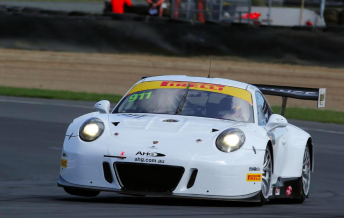 Walkinshaw Racing will be in action at Challenge Bathurst

Walkinshaw Racing is the latest high profile team to commit to the new Challenge Bathurst sprint event later this month.

The Melbourne operation will field its Porsche 911 GT3-R at the November 24-27 meeting which is set to welcome several GT3 teams looking to enhance their preparations for February’s Bathurst 12 Hour.

Maranello Motorsport, Miedecke Stone Racing, Steven Richards Motorsport and MARC GT will be among the teams taking part in a series of 20 minute timed sessions at the 6.2km circuit.

More than 320 cars have been confirmed to take part in the inaugural event.

Challenge Bathurst will offer Walkinshaw Racing valuable data given the latest Porsche 911 GT3-R will be making its Bathurst 12 Hour debut next year.

“The car hasn’t been there (at Mount Panorama) before so that is why it is important to do that test,” Walkinshaw boss Adrian Burgess told Speedcafe.com.

“We will learn a lot and which ever drivers we field will get some good mileage.

“At this point in time I don’t think the balance of performance (BOP) plays in our favour at that circuit, so we have got to go there understand what we can do, to ensure we can do the best job possible.

“I think the Porsche will have a different BOP at Sepang and Macau. We haven’t been granted that but hopefully we get that by the time we are racing there.”

Burgess remained tight lipped on who will pilot the car, but admitted the squad will know its Bathurst 12 Hour driver-line up prior to Challenge Bathurst.

Talbot has been named on the entry list to pilot the car at the Challenge Bathurst event.

Burgess did however confirm the operation is looking at ‘experienced’ pilots with the roster to be finalised once the squad decides whether to enter the Professional or Pro-Am class.

“We are pretty close (in securing our driver-line up). We are just ticking a few boxes,” he added.

“They are good experienced drivers and the decision of what class we enter will decide the drivers.”

Walkinshaw Racing remains keen to expand its GT program on top of the solitary 911 GT3-R it secured for this season.

Burgess says the operation may have an option to acquire two more cars before the end of the year.

“There is a couple of cars available,” he added.

“The manufacturer is sending out a couple of cars for Sepang and Macau and we might keep one or two of those, but it is very fluid at the moment.

“We would like to run more but if it doesn’t work out then we will continue with what we have got, but if we can add another car then that would be great.”