Jeremy Burgess to be inducted into SA Hall of Fame

Jeremy Burgess to be inducted into SA Hall of Fame 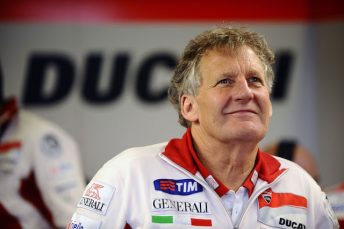 Prolific winning team boss Jeremy Burgess is set to be inducted into the 2016 Motorcycling SA Hall Of Fame.

The South Australian will become the fifth recipient of the honour at the annual Night of Champions function on November 19.

Burgess had risen to the fore in the 1980s, preparing the championship-winning Honda for Wayne Gardner before acting as crew chief for Mick Doohan through his five 500cc world titles from 1994 to 1998.

He then shifted to Valentino Rossi during which time the Italian claimed seven world titles including five unbroken from 2001 to 2005.

His partnership with Rossi transversed three manufacturers, moving from Honda to Yamaha and eventually to Ducati with the Italian.

“There are many highlights and it is not easy to say which are the biggest, but for sure winning the World Championship with Wayne Gardner in 1987 is certainly up there,” Burgess reflected ahead of his induction.

“Being the first 500 World Championship ever won by an Australian, and the Grand Prix now held in Australia is a direct result of the efforts of Wayne and the interest that it generated in Australia at the time.

“Working together with Mick Doohan after Wayne was a successful period winning five consecutive Championships.

“The efforts of Mick Doohan were a pleasure to watch. His dominance at times and the margins that he would win by caused some to comment that ‘the racing was boring’. Certainly not the case from where I was watching.

“For Mick to win five titles after what could easily have been a career ending accident, with severe restriction in his right foot showed the qualities of this great Australian. The attitude of ‘I can still do this, I won’t give up’ was inspiring to all who witnessed his effort.”

“After the retirement of Mick Doohan, I was placed in charge of the program to bring the talented Italian Valentino Rossi to the 500 World Championship.

“Winning the final 500 World Championship in 2001 and then the first of the MotoGP 4-stroke championships with Valentino were great moments for us both.

“All in all, there are too many so called highlights, for me. The entire 35 years was a highlight,” he added.

“But none of it would have been possible without a great number of likeminded people, riders, mechanics, engineers, journalists and management staff who worked many long hours together.

“To be inducted into the Motorcycling SA Hall of Fame is a great honour to be placed in the company of people of the standing of Jack Young, John Boulger, Murray Williams and Andy Caldecott is truly humbling.

“When we set out in life, we are not really sure where the road will take us.

“I feel very fortunate to have been able to do what I really wanted, and to have been successful at the highest level.

“To be inducted to the Hall of Fame is not something any of the recipients set out to do. We all set out to achieve the very best in our chosen areas of motorcycle sport.”

Brenton Matters, president of the Motorcycling SA Board, describes Burgess as a very humble and inspiring South Australian.

“In his time in the sport, both here in Australia and around the world, he has achieved so much,” Matters said.

“Working with riders who we now consider legends of the sport, Jeremy was involved with them right from the beginning and helped them to become the World Champions they are today.

“I’m very much looking forward to our Night of Champions and acknowledging the overwhelming contribution to the sport that Jeremy has made.”