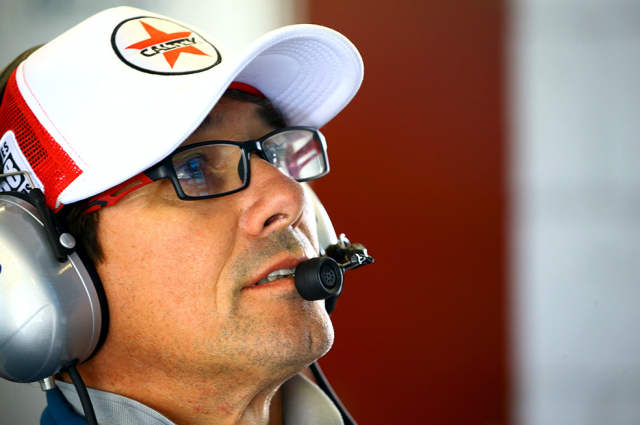 Long-time Triple Eight technical director Ludo Lacroix is set to join DJR Team Penske in what shapes as one of the most significant recruitments in the category’s history.

The Queensland-based Holden squad announced this morning that Lacroix will leave Triple Eight following 17 years with the business across the United Kingdom and Australia.

Speedcafe.com has learned that the Frenchman is poised to join DJR Team Penske as it continues to build its emerging Supercars team.

DJRTP’s move to secure Lacroix follows a mixed first two seasons in the category under the team’s American ownership that is yet to yield a race win.

Its technical line-up is currently led by South Australian Nick Hughes, who was appointed to the technical director role by Penske when it bought a majority stake in the team late in 2014.

Lacroix’s exact place in the Penske structure remains unclear, with the team declining to comment on the Frenchman’s future when contacted by Speedcafe.com.

The veteran will undoubtedly add significant firepower to the squad which boasts extensive resources in both Australia and the United States.

Having returned to race engineering duties this year on Craig Lowndes’ Holden, speculation is rife that Lacroix will be paired with Penske’s new star driving recruit Scott McLaughlin.

Crucially, Lacroix’s defection from Triple Eight to Penske will come as Supercars teams prepare to design all-new cars for the category’s Gen2 era.

Lacroix was expected to head-up development of Holden’s new car next year ahead of its debut in 2018 as part of Triple Eight’s deal with the manufacturer.

He had previously designed the aero packages for the BF and FG Falcons during Triple Eight’s stint with Ford before also leading the development of the VF Commodore.

Penske is meanwhile yet-to-commit to a direction for Gen2 as it continues to bide its time with Ford.

Lacroix’s move to a rival team is sure to ruffle feathers at Triple Eight and comes little over three years since its team manager Adrian Burgess was poached by the Holden Racing Team.

Triple Eight principal Roland Dane is understood to have known of Lacroix’s intention to leave for some months, with plans to fill the breach already underway.

The team has announced the signing of ex-F1 technical chief Sam Michael in a part-time mentoring role and says that it will “roll out a number of new engineering appointments over the next three months”.

John McGregor is expected to take over Lacroix’s race engineering duties alongside Lowndes having worked closely with the pair throughout this season.