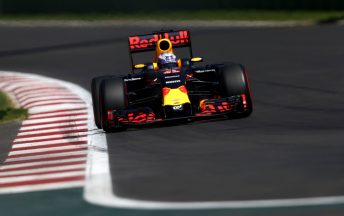 A post-race penalty for Sebastian Vettel has handed Daniel Ricciardo a podium result at the Mexican Grand Prix.

Vettel was awarded a 10 second penalty and two points on his license for “potentially dangerous driving” after changing direction under braking in his late battle with Ricciardo.

The pair had been battling for fourth behind Max Verstappen, who took the flag third before having 5s added to his race time for straight-lining Turn 1.

Vettel’s penalty drops him behind both Red Bulls to fifth in the final result of a race dominated by Mercedes duo Lewis Hamilton and Nico Rosberg.

Ricciardo had labelled Vettel underserving of his podium prior to the penalty being handed down, while the German was also criticised for blasting race director Charlie Whiting via his team radio following Verstappen’s off-track excursion.

Firmly established in third in the championship, Ricciardo now has eight podiums for the season.