Verstappen tells Vettel to ‘go back to school’

Verstappen tells Vettel to ‘go back to school’ 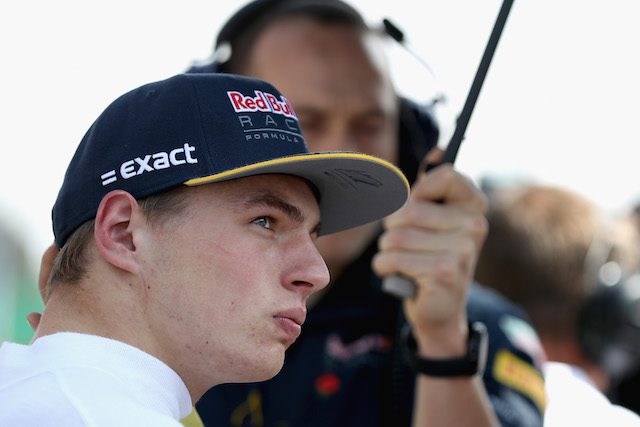 Teenage tyro Max Verstappen has retaliated against Sebastian Vettel, saying the German should ‘go back to school’ after a turbulent end to the Mexican F1 Grand Prix.

Verstappen infuriated Vettel when the Ferrari driver had pressured the 19-year-old into a mistake three laps from the end.

Holding onto third place, Verstappen locked his brakes and fired onto the grass at Turn 1 before rejoining with an increased advantage over Vettel.

After initially being elevated to third following a penalty issued to Verstappen, Vettel was later hit with a 10s penalty and stripped of two license points following his incident with Daniel Ricciardo which saw him drop to fifth.

Speaking on his team radio following Verstappen’s off, Vettel launched a stinging tirade, saying ‘here is a message for Charlie (Race Director Whiting), f… off, f… off’.

He then added that he wanted to ‘hit someone’.

Verstappen believes he should have escaped a late 5s penalty which stripped him of the final podium spot, dropping him to fifth before then moving up to fourth after the belated action against Vettel for dangerous driving.

The Dutch driver did, however, feel that Vettel’s behaviour in response to separate incidents with the Red Bull pair was getting out of control.

“It’s ridiculous what he (Vettel) did. Daniel is alongside him and he turned in and they touched,” Verstappen said.

“And then he (Vettel) starts shouting on the radio. I don’t know how many times he is using very bad language.

“So I think he has to go back to school or something.

“I will speak to him. It’s just ridiculous the way he’s handling it.

“He’s always so frustrated. He’s shouting on the radio.

“He’s just a very frustrated guy at the moment.”

When asked if he intended to talk to Verstappen over the incident, Vettel replied: “No. I don’t think there is anything to say.”

Vettel also suggested that he had sought to have a meeting with Charlie Whiting to smooth over his outburst over the radio.

“It was very clear. I was very emotional so I in fact asked to go and see him already,” Vettel said.

“When you are in the car its very emotional and there is more adrenalin than you can imagine.

“I think its not right what Max did. I was told they were looking into it for three laps. I was sort of getting upset as you can imagine.”