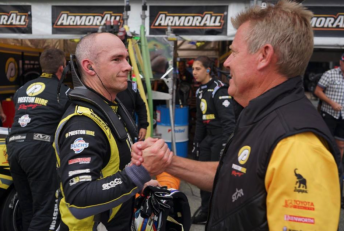 After ending an exasperating run of ill luck, Team 18 is confident it can be a top order challenger at the ITM Auckland Super Sprint at Pukekohe this weekend.

Since Lee Holdsworth suffered multiple fractures in a 56 g impact which destroyed the Holden, the team had endured a run of failures.

Holdsworth and co-driver Reindler broke through with a seventh place finish last time out at the Castrol Gold Coast, which was met by the team as a pseudo win after its run of outs.

Team owner Charlie Schwerkolt is now confident that change in fortune can continue in New Zealand which will see 4x100km hard tyre only heats run without pit stops.

“We’ve had some rotten luck that we couldn’t control,” Schwerkolt told Speedcafe.com.

“Hopefully we can get on a little wave now and just stay under the radar and keep pushing.

“We don’t have any pit stops at Pukekohe so we don’t have to rely on anyone else so that means a lot.

“It is a hard tyre race and that should be good for us so I’m excited about our prospects there as well.

“I’m grateful for all the sponsors who have stuck by me all year and through all the tough times.

“It was such a relief (on the Gold Coast) just to even finish a race.”

Indeed, Holdsworth can testify to the fact that it was a relief to back up the solid pace of the Holden by seeing out the chequered flag. The plucky driver was robbed of a chance to shine at Bathurst when the car limped to the pits after just two laps with engine problems.

Saturday’s race on the Gold Coast then saw Reindler ran solidly until a race-ending mistake saw the car retire after just 34 laps.

“I’ve been told that I’m the highest paid Supercars driver per lap. I just come for practice and qualifying these days,” Holdsworth quipped.

“Coming back after Darwin with a brand new car it was always going to take a little bit of getting used to or working out what’s different about it.

“There were a couple of things that we’ve had to get our head around.

“Each weekend we’ve been tuning the car and getting it going in the right direction.

“Every time we’ve hit the track it’s been going quicker and quicker.

“At Sandown we were a top three chance but there was an issue with a lapped car.

“At Bathurst we started 15th but again, all weekend we improved the car. It felt like I had the best car I’ve ever had at Bathurst. I was pumped but again we got knocked down.

“And again in the first race at the Gold Coast we qualified seventh and we hadn’t been in the top 10 for a long time so that was a great result. But that didn’t work out either.

“In the Sunday race we started 12th and ended seventh. It was a great result for the team, really good for our sponsors. Everyone has been so supportive of us.

“Everyone in this team just keeps punching away when times are down.

“Jeff Grech (team manager) is good at picking everyone back up and making sure that the whole team co-ordinates properly.

“He’s got so much experience and that experience really shows when those things keep happening with car #18.”