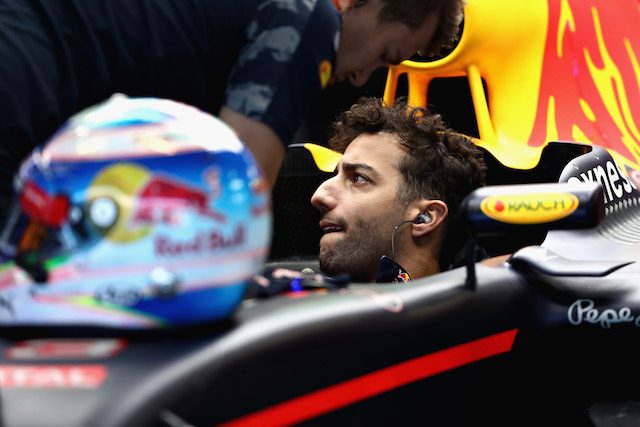 Daniel Ricciardo has lashed out at his former team-mate Sebastian Vettel, claiming the German did not deserve his podium place after a messy finish to the Mexican Formula 1 Grand Prix.

On fresher tyres, Ricciardo was reeling in the front runners before attempting an inside pass on fourth-placed Vettel who was narrowly behind Max Verstappen on Lap 70 of 71.

The move saw Vettel appear to change his line under braking in Turn 4 which resulted in contact with Ricciardo, who desperately tried to avoid a collision he otherwise did not anticipate.

The pair banged wheels momentarily before Vettel held his position to the end which ultimately saw Verstappen stripped of third place, elevating the four-times World Champion into the final podium spot.

“He (Vettel) doesn’t deserve to be there on the podium. Look he’s smiling now,” Ricciardo said with eyes glanced toward the rostrum.

“It just looked like he opened it so I committed to the inside. I thought I had every right to be there and he’s just kept closing the door under braking.

“So I locked the brakes to try and avoid contact but he kept closing so in the end I had nowhere to go.

“I’m so frustrated with that.”

Ricciardo had been summoned to the pits after the opening lap Virtual Safety Car to dispose of his super softs and switch to medium compound rubber which was planned to see him through to the end. 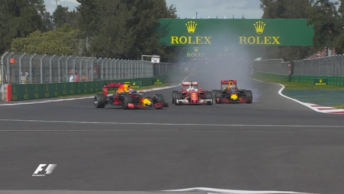 However his rear tyres were giving up and he had to pit for soft rubber with 20 laps remaining which had given him the chance of rapidly hauling in the leaders.

The incident with Vettel thwarted what would have been a gripping fight with Verstappen within sight of the flag.

“The enjoyment factor was still there,” added Ricciardo.

“Obviously the outcome was a little bit of a shame. I really wanted to be on the podium.

“The last 10 laps the engineer was getting into me letting me know that we are going to have a fight on our hands.

“It was a shame it got cut two laps short.

“We know Max’s moves have been a bit questionable. I guess it was the same case today with Seb.

“But this whole move under braking, if you are going to defend commit early and you make your bed.

“You don’t do it once you’ve already been outfoxed.

“Seb was there he moved, I went so it’s like I won the chess match if you like. And then he’s like ‘oh, I screwed up and now I’m going to try and repair my mistake.’

Ricciardo also suggest that race winner Lewis Hamilton should have been penalised, like Verstappen who was handed a 5s penalty, after spearing onto the grass at Turn 1 off the start line.

“How you can be leading then defend, lock your wheels and go off track and still stay in the lead?

“I think Lewis deserved a penalty.

“Anyone in that position deserves a penalty. I saw Max cut a chicane trying to defend Seb and he got a penalty so I don’t know, to be honest, what the difference was with his move and Lewis’.

“For me, if you locked up the brakes and cut the corner it’s a mistake. You have to pay the price.”