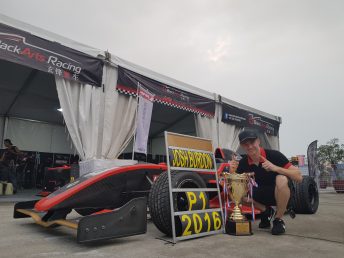 The 23-year-old from Hobart wrapped up the championship with a race to spare after taming a tricky drying track to win the opening race of the weekend.

A decision to fit wet tyres proved crucial which allowed Burdon to romp home to the chequered flag from BlackArts Racing team-mate Pavan Ravishankar and ahead of his nearest rival Maxx Ebenal.

Despite an early Safety Car, Burdon powered through to score his seventh victory of the season in the final heat to finish the campaign on a positive note.

“It was great to take out the championship, there’s been a lot of stress with some of the ups and downs recently,” said Burdon.

“There was still a bit of pressure for the last race, we may have won the championship, but you always want to finish the year with a win just to top it all off, and we were able to do that.”

Jackie Chan DC Racing took the honours in the opening round of the Asian Le Mans Series at the Zhuhai International Circuit.

After taking the lead from the Algarve Pro Racing Ligier JSP2 early in the race, the crew of Ho-Pin Tung and Gustavo Menezes stormed to a comfortable 43.97s victory.

The results came despite completing more pitstops than their rivals in the four hour race and an investigation for overtaking under yellow flags.

Algarve Pro Racing completed the podium with its #24 car of Tacksung Kim, Andrea Roda and Matt McMurry finishing second, while the Michael Munemann, Nicky Catsburg and Andrea Pizzitola was third.

The Asian Le Mans Series heads to Fuji International Speedway for the second round from December 2-4.