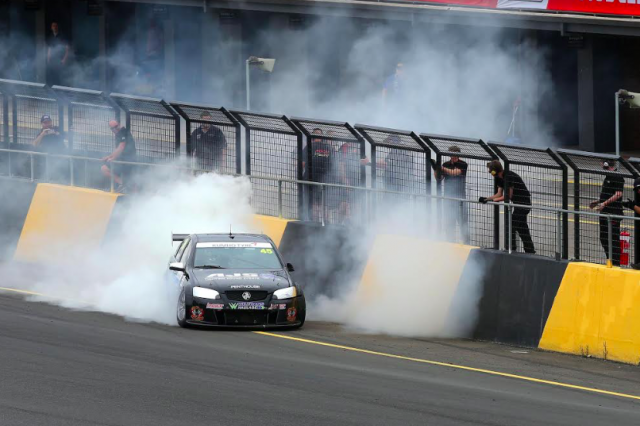 Douglas, a former Supercars Championship full-timer who is also competing in this year’s Dunlop Series, proved the class of the 2016 Kumho field aboard THR Motorsport’s ex-Kelly Racing Holden.

The 32-year-old won the opening nine races of the season before being out-gunned by youngsters Garry Jacobson (MW Motorsport Ford) and Josh Smith (Brad Jones Racing Holden) over the final two events.

Jacobson won this weekend’s round at Sydney Motorsport Park with two of the three race wins, giving the Prodrive Dunlop Series star a perfect score of two round wins from two starts this season.

Smith was second for the Sydney meeting after scoring a maiden victory in Race 2.

Douglas, meanwhile, was at his consistent best and sealed the title with a solid run to fifth place in race two.

With the title decided, he made a storming start in the final 12-lap race and ran second before a late race clash with Tyler Greenbury saw him suffer damage to the left front corner of his VE Commodore.

Ceding third place to Josh Smith in the closing laps, Douglas still finished on the podium and celebrated his championship win with several Kumho-shredding burnouts post-race.

The title win was not only the first for the 32-year-old former Bathurst 1000 runner-up, but also the first for Adelaide-based team THR Developments.

“We knew from the start that the guys, the two young blokes (Greenbury and Smith), were going to be really good at the end,” said Douglas.

“They’ve got good equipment and good teams around them so it was important to bank those points early, which is what we did, then stay consistent from then on.

“I won an Australian championship in go-karting as well but it’s been a long time between drinks.

“At the start of the year you set out to win and when you achieve it it’s great.

“It’s good for the boys. As a driver you get all the trophies and the accolades but we’re kind of the last piece of the puzzle – all the work gets put in back at the workshop.

‘I’ve been around a while now and been around that pressure stage where you’re trying and trying, and now I’m just enjoying it whatever happens.”

Greenbury, who joined MW Motorsport for the season finale, sealed second in the series with fourth overall.

Michael Anderson ended the year fifth in points and with the Most Improved award aboard his ex-Ford Performance Racing Falcon.

Shannons O’Brien was dominant in the TransAm Sports Sedans with three wins driving his Pontiac Firebird.

Graham Russell took out the five lap Mini featuring celebrating fifty years since the marque’s triumph in the Great Race.

Group Nb and Group S completed the program with four races each, with the finals won by Greg Toepfer (Ford Mustang) and Wayne Seabrook (Porsche 911) respectively.