Ogier fends off Tanak in Wales

Ogier fends off Tanak in Wales 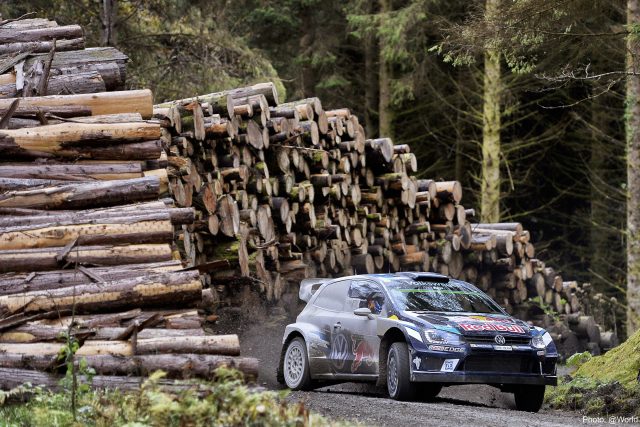 Ogier had to press on the second day in Wales

World Rally Champion Sebastien Ogier has been forced to step-up the pace to fend off a determined effort from Ott Tanak at Wales Rally GB.

Although the margin at the end of the leg was 33.8-sec, that only came after the Volkswagen star had to push in fog and greasy dirt roads in mid-Wales.

Tanak won four of the first six special stages in his DMack-shod Ford Fiesta RS to cut the Frenchman’s lead from 37.3sec to 24.8sec. That was before Ogier, on Michelin rubber, struck back on the tricky penultimate test at Aberhirnant.

“I tried to go flat out for the whole day, pushing hard all the time,” said Ogier. “Tomorrow I’ll do what I can and see if it is enough.”

“We knew Ott’s tyres would be better in these conditions, so it’s good to still have a decent gap going into tomorrow – especially as we won’t have the advantage of road position anymore and Ott is not the kind of person who gives up easily, and I don’t want to have to take too many risks.

“I’m really enjoying the weekend – and of course, you always enjoy it a little bit more when you’re fighting to win. Our main target tomorrow is to seal the Manufacturers’ title for Volkswagen – and if we can do that with a victory, all the better.”

Thierry Neuville is chasing the runners-up position in the drivers’ championship and was relieved to escape unscathed after mounting a bank in the morning. He pulled away from team-mate Hayden Paddon to end 12.6sec clear. 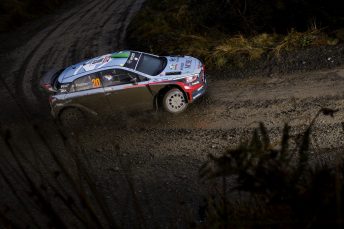 Paddon could not get to grips with the tricky conditions. The mud required a straighter and more precise driving line, in contrast to the Kiwi’s aggressive style, and although he modified his i20’s set-up, he could not improve the traction.

“It’s been a day of careful strategy today with no lunchtime service and no remote tyre fitting zone,” said Paddon.

“We struggled slightly to get confidence on the morning loop. We didn’t lose much time but I needed to find my mojo a bit. The conditions were quite typical for Wales, still very slippery but with more consistent grip. I’ve had to dial-in the driving because it’s not my natural style, so that’s been the main struggle. We made some changes, which gave me a better feeling, but we couldn’t find enough traction.

“It’s a close fight for the podium with Thierry and the gap is not so big. We’ll have to see what we can do to build more confidence for Sunday’s final stages.”

After being in the thick of the podium fight, a lacklustre Kris Meeke slipped back. The Ulsterman used both spare wheels after two slow punctures this morning in his Citroen DS 3. With no opportunity to take onboard additional tyres, he steered a careful path through the rest of the day to preserve fifth.

Sixth-placed Dani Sordo battled the unpredictable conditions in his i20 but was under no pressure from Mads Ostberg behind. The Norwegian picked up a 10sec time penalty after an unplanned suspension change on his Ford Fiesta RS this morning meant he left the Deeside service park late.

Jari-Matti Latvala closed to within 7.2sec of Ostberg, who also stalled his engine in the opening stage, as he recovered from yesterday’s broken driveshaft in his Volkswagen Polo R. Stephane Lefebvre and Eric Camilli rounded off the leaderboard.