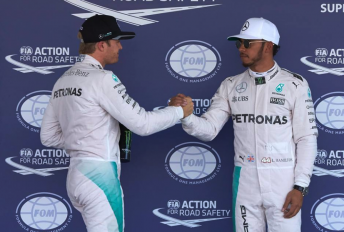 Lewis Hamilton has led a Mercedes lock-out of the front row in qualifying for the Mexican Formula 1 Grand Prix.

Hamilton claimed Mercedes’ 18th pole in 19 races this season with a 1:18.70s lap on his first run before falling short of improving on his final assault in the Q3 shootout.

Rosberg, however, found himself anchored in fourth after the first runs before he was able to lift on his final attempt, falling .25s short of Hamilton.

Red Bull pair Max Verstappen and Daniel Ricciardo will share the second row after they were both trumped by Rosberg’s resurgence in the dying stages.

Rosberg has struggled for pace all weekend, however he has responded when it was needed most to stay within range of Hamilton for the race as the German edges ever closer to a maiden world championship.

“I put it together in the end. It has just taken a bit longer this weekend to find a way,” Rosberg said.

There was considerable relief in the Mercedes garage after Rosberg’s late recovery.

“Lewis was perfect, Nico was really worrying. But then he got the lap in in the end and thank god he is on the front row of the grid,” Mercedes’ Niki Lauda said.

Ricciardo was pleasantly surprised by falling just .4s off Hamilton’s flyer however he remains guarded over the prospects in the race.

“I don’t know how we are so close to pole,” Ricciardo said.

“Everyone must of have handling issues out there. It was a handful. To come away with fourth I think we are a bit lucky.”

Nico Hulkenberg was ecstatic with his effort to qualify fifth in the Force India ahead of the Ferraris of Kimi Raikkonen and Sebastian Vettel.

Raikkonen complained of a lack of power in his machine with the team indicating there was an engine issue.

The race is scheduled to start at 0400 tomorrow (AEDT).