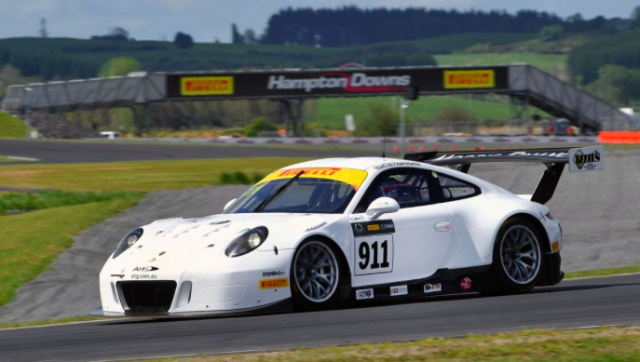 Walkinshaw Racing has secured provisional pole for the Hampton Downs 101 ahead of this afternoon’s Top 10 Shootout.

On combined average times, the Duvashen Padayachee/John Martin entry topped the order by 0.2s from the Eggleston Motorsport Mercedes of Peter Hackett and Dominic Storey.

Padayachee had been the star of opening qualifying while co-driver Martin was 11th fastest in the second session that featured the bulk of the professional drivers.

Eggleston Motorsport enjoyed a strong showing in both 25 minute outings with Hackett second in Q1, while Storey was an impressive fourth in Q2.

The Miedecke Stone Racing Aston Martin of George and Andrew Miedecke was third ahead of the Lago Racing Lamborghini of Roger Lago and David Russell.

Nissan has secured a place in the Top 10 shootout by finishing fifth after Simmons posted a time good enough for fifth in Q1, before Michael Caruso backed up the pace with ninth in Q2.

Circuit owner Tony Quinn will see his Aston Martin in the shootout after qualifying sixth overall in the car, he shares with Supercars legend Greg Murphy.

Christopher Mies’ scintillating pace that saw him top Q2 has helped the #1 Jamec Pem Racing Audi R8, he drives alongside Tony Bates, into the top 10 in seventh.

Reigning Australian GT champion Mies clocked the fastest lap of the weekend with a 1:29.82s as he dominated the second 25 minute session.

Steven Richards Motorsport just missed out on the top 10 by 0.1s with their BMW M6 GT3, while the Jamec Pem Racing Audi  R8 of Garth Tander and Daniel Bilski will start Sunday’s race from 12th on the grid.