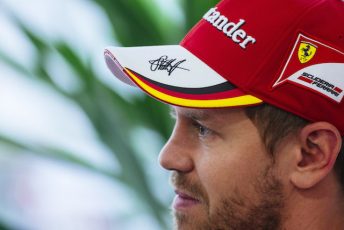 Sebastian Vettel has set the pace in Practice 2 for the Mexican Formula 1 Grand Prix.

Hamilton had a scrappy run, going off the circuit a couple of times before settling second after being the pacesetter in Practice 1.

Daniel Ricciardo described the conditions as tricky on a low grip surface before finishing fifth quickest ahead of Nico Hulkenberg.

Daniil Kvyat was forced to stop in the entry to the pit lane in the closing seconds of Practice 2, shutting down his smoking Toro Rosso after losing power. Kvyat was 11th fastest.

Vettel, however, remains guarded about Ferrari’s promising opening to the weekend, believing Hamilton can extracted more pace from the Mercedes.

“I think Lewis’ lap didn’t look particularly good and I think he has a little bit more in his pocket,” Vettel said.

“We have to be a bit more realistic. If its like this tomorrow (qualifying) we will take it for sure.”

Verstappen’s run in Practice 1 was cut to just 10 laps after his brakes caught fire midway through the session.

Rosberg was seventh in the opening session after making use of the medium compound tyres.