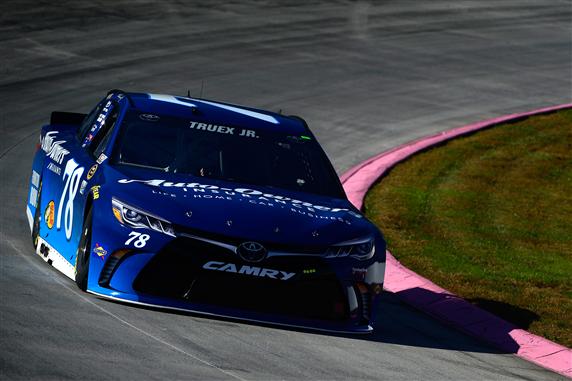 Truex Jr. has taken pole at the ‘Paperclip’

Pole position for Martin Truex Jr. at Martinsville has showed that he will continue to press over the final races of the NASCAR season even though he is out of the championship hunt.

Truex’s chances went up in smoke last weekend at Talladega, but he wants victory at the track known as the ‘Paperclip’.

It is the second-straight week that Truex has put his Toyota on the point and fifth time this season.

“It’s a cool accomplishment and this track is so difficult and so tough,” Truex Jr. said. “The history here and it’s just a place that everybody wants to be good at.”

“Really proud of my guys after the week we had last week. Obviously to come here, perform and get it done – I’m excited to see what we can do the rest of the weekend.”

The Toyota driver will share the front row with Chase contender Joey Logano at what is the opening race of three in the Round of 8.

While title contenders Matt Kenseth and Kevin Harvick will start from start 17th and 20th.

The tight confines of Martinsville did catch out two drivers with Ricky Stenhouse Jr. and Austin Dillon both finding the concrete.

If one of the eight remaining Chase drivers wins Sunday’s race, he will be locked into the one-race, winner-take-all championship race at Homestead-Miami Speedway. In that race, the best finisher of the final four drivers will be crowned the 2016 NASCAR Sprint Cup Series champion.