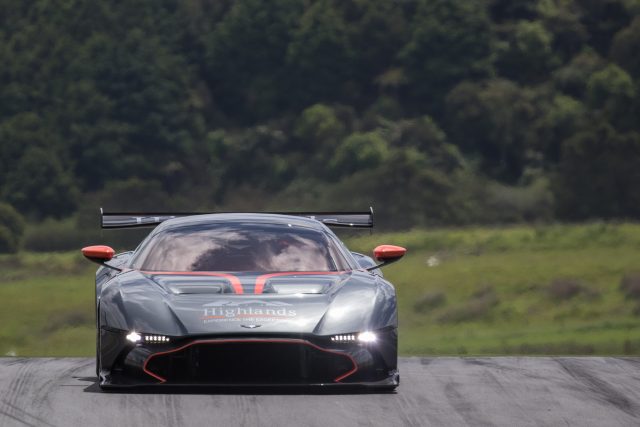 Craig Lowndes behind the wheel of the Aston Martin Vulcan pic: Rhys Vandersyde

Craig Lowndes has received a taste of the spectacular Aston Martin Vulcan supercar at Hampton Downs.

The Triple Eight Supercars driver has been tasked to complete demonstration laps and hot rides in the $3.7 million AUD Tony Quinn-owned trackday weapon at the Hampton Downs 101 event.

One of 24 examples worldwide and the only one in the Southern Hemisphere, the Vulcan is powered by a 7.0 litre V12 that puts out over 800bhp, capable of pushing the 1350kg hypercar beyond 320km/h.

Impressed by the sportscar’s performance on the 4km New Zealand circuit, Lowndes admitted he was a touch nervous when he first climbed behind the wheel.

“I had to get rid of the price tag from my brain and drive it for what it is,” Lowndes told Speedcafe.com.

“It is a great car and very easy to drive with the electronic aids that GT cars have got. It made my life a lot easier.

“I would like to have a crack at it on slick tyres but on road tyres it is pretty good.

“It would be a great race car. The car is quite big and you have to get used to sitting so far back in the cockpit. It is a treat to drive despite being very daunting to look at from the outside.

“The power is strong. When you are flat to the floor it just keeps pulling down the back straight and it brakes really well.”

Lowndes will jump back behind the wheel of the Vulcan on Sunday ahead of the headline Hampton Downs 101 Australian GT showpiece.

Spectators that purchased pre-booked tickets were placed into a draw to win hot laps in the Vulcan alongside Lowndes.