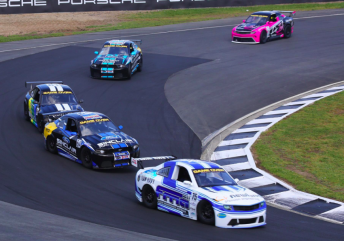 Aussie Racing Cars has confirmed a seven round calendar for next season featuring the new Coates Hire Newcastle 500 meeting.

The popular series will continue on the Virgin Australia Supercars Championship support bill with the season beginning at the Clipsal 500 from March 2-5 as reported earlier this week.

Tasmania’s Symmons Plains will host the second round in April before a trip to Western Australia’s Barbagallo Raceway in May.

Townsville’s Reid Park circuit is another new feature on the schedule ahead of visits to Sydney Motorsport Park and a return to the Gold Coast streets for the first time since 2014.

The Gold Coast round will feature the Trans-Tasman Womens Challenge which will pitch a driver from Australia and New Zealand against each other.

The series concludes on the the newly constructed street circuit at Newcastle for the Coates Hire 500.

Aussie Racing Cars are in action at Hampton Downs this weekend with the venue playing host to the final round.

Craig Woods boosted his title hopes with a victory and a second place in today’s two races.

Woods followed Kel Treseder home in the opening heat having started from third on the grid.

Treseder led from pole, and despite two Safety Car periods, he managed to just hang on to the victory from a charging Woods, who disposed of Peter Carr in the early stages.

Woods emerged as the star of the second race, taking the lead at Turn 2 on the opening lap.

The title hopeful was pushed hard by Treseder for the remainder of the race with just 0.07s separating the pair at the flag.

Carr claimed his second podium of the weekend in third ahead of Sciberras, Grant Ludbey and Duckworth.