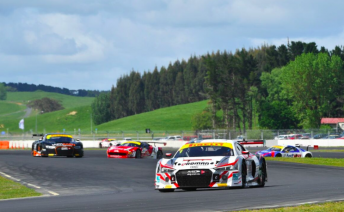 Drivers are confident the newly reconfigured Hampton Downs will produce entertaining racing ahead of Sunday’s third round of the Australian Endurance Championship.

The event marks the grand re-opening of the revamped New Zealand circuit since its $21.6 million AUD upgrade, which has seen a 1.2km extension added to the track alongside a refurbished pit complex.

Adding approximately 20 seconds to the lap time, the new section consists of a longer straight into the new Turn 2 hairpin, followed by a series of tricky, undulating curves.

The extension culminates in a challenging double-apex left hander, named by circuit owner Tony Quinn as the ‘Double Bastard’, which rejoins the original circuit.

Lago Racing’s David Russell, who topped the times on Friday with a 1:30.72s, was impressed by the circuit’s makeover having previously driven the 2.8km iteration.

“Firstly congratulations to Tony and all of his staff for what they have done at the circuit,” Russell told Speedcafe.com.

“I’ve been to this circuit before the extension was built and what they have done in a very short period of time is fantastic.

“The new surface is exciting because it is a little bit bumpy in areas and that is all part of the character.

“The extension is really fun especially in a GT car because of the traction and grip available.

“I think it is going to make for some really good racing.”

The 30-year-old believes drivers will be presented with several new overtaking opportunities.

“It is quite a tricky little layout and there are multiple different lines you can take,” D’Alberto told Speedcafe.com.

“I think there is definitely more passing opportunities especially into Turn 2 and it has added a huge amount of difficulty so it has enhanced it that way.

“It is great that they have done it and I think everybody is head scratching to get the fastest lap time.”

Qualifying will begin with two 25 minutes sessions, one for each driver, with the combined times averaged to determine the 10 cars that will progress to the shootout.

Each car will then be given one lap to post a time which will decide the pole position winner.

“I’ve done a few shootouts in Supercars before, not for a few years though,” added D’Alberto.

“When the tyres are warm they are very good, but straight out of the blocks it is like driving on ice.

“Trying to get temperature in the tyre for the one lap is going to be quite a challenge in itself.”